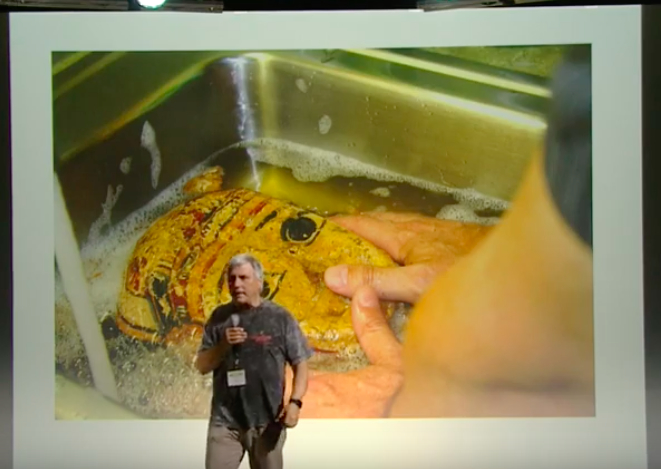 For some time now, I’ve been trying to make progress in ascertaining the previous ownership of both the manuscripts and the cartonnage (from mummies and other sources) that ended up in the Green Collection. This post will focus on the mummy masks. For the record, there are several mummy masks that have been associated with the Green Collection over the years. Most famously, there was the mask that was dismantled by Scott Carroll and a group of students at Baylor University in January of 2012, which was documented in a video on Youtube.

There are also various pieces that went on display in the travelling “Passages” exhibitions, such as the pair below, which were included in a video associated with the iteration of “Passages” on display in Springfield, Missouri in 2014: 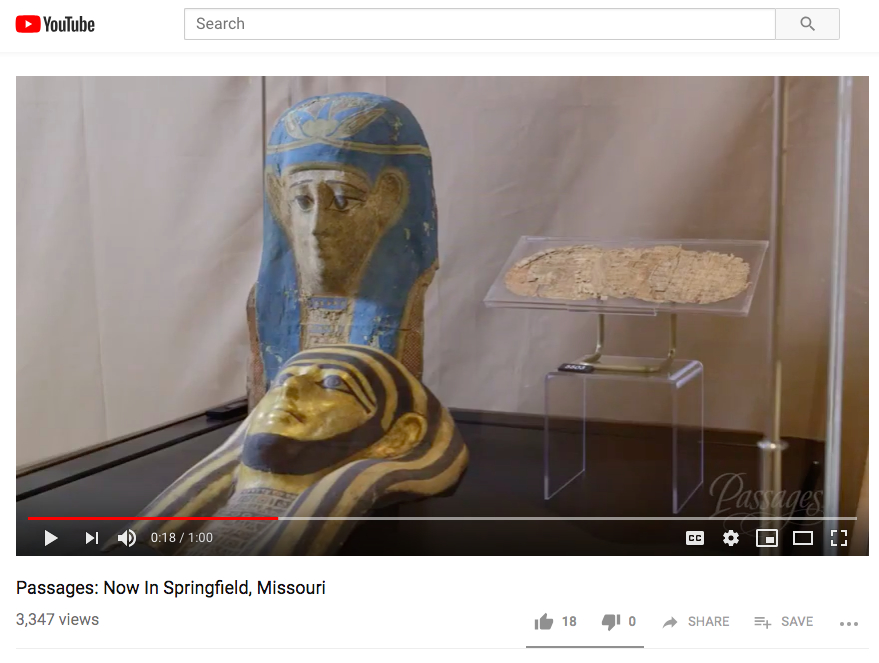 Still another mask has appeared in publications associated with the “Passages” exhibition, such as this item from Scott Carroll, Passages: 400th Anniversary of the King James Bible (Oklahoma City: Passages, 2012): 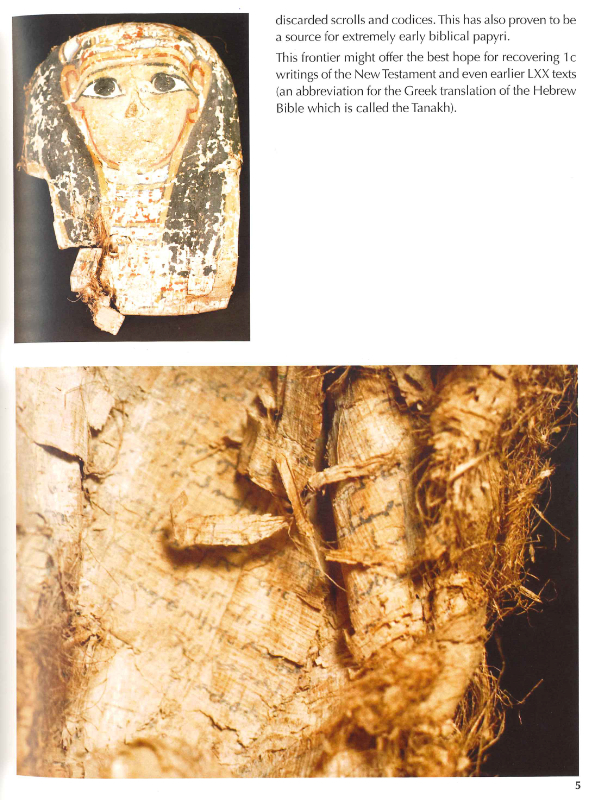 The same mask has featured in Scott Carroll’s public presentations: 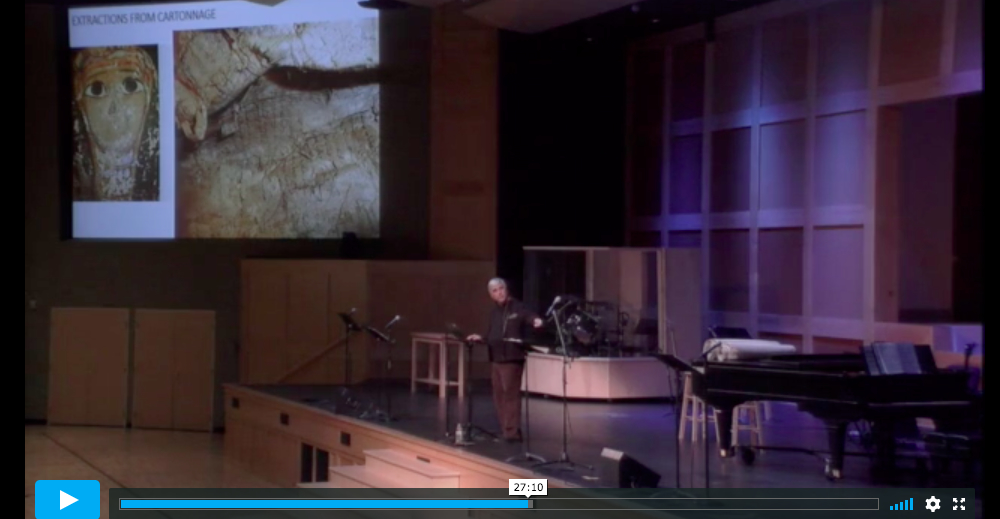 It appears to be this mask that was dismantled at some point (again at Baylor University) as recorded in a series of slides in a 2016 lecture by Scott Carroll:

Finally, there was a mask that was said to have been dismantled by Jerry Pattengale during the LOGOS seminar in the summer of 2013 at Oxford. I have been unable to find photos of the mask itself, but there is a video overview of that seminar with a clip of Pattengale sitting at a table with what appears to be drying papyrus fragments. Pattengale presented a better image of the event in the Colorado Springs “Passages” Speaker Series (thanks to David Bradnick for the screen shot): 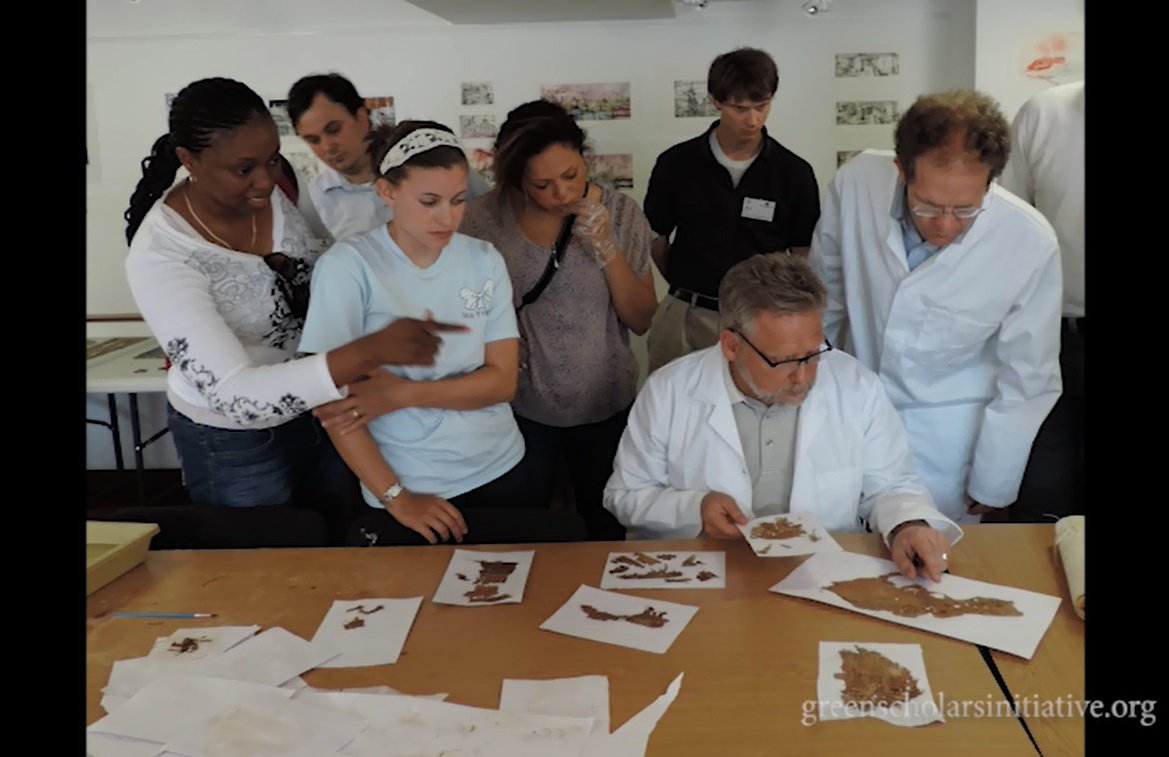 There is also a description of the 2013 event by one of the students involved:

“I experienced the thrill of discovery and exploration as we worked with a mummy mask, dipping it in a series of chemical baths, each carefully mixed at precisely the right temperature, in hopes of finding within the layers of papyri some fragments with text on them. . .We not only watched this delicate procedure, but we were also part of the process. I prepared sheets of art paper for Dr. Pattengale as he gently peeled large papyrus fragments off the mask made of cartonnage, an ancient paper-maché-like material that is a major source for biblical fragments.”

[Update 30 January 2019: Thanks to David Bradnick for pointing out this gilded mask that was displayed during the first Verbum Domini exhibit in 2012]: 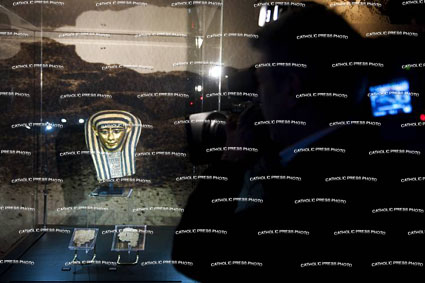 If anyone knows of additional images of different masks in the Green Collection, I would be grateful for images and links, which I will add to this page to keep a running record.

Brice Jones and Roberta Mazza first drew attention to the Green Collection’s masks several years ago, and one of the main questions they asked remains unanswered: Where did these mummy masks come from?

My working assumption had been that at least some of the mummy masks might be acquired from the various lots that show up in the major auction houses from time to time. Another less happy possibility is that these masks might be the result of looting in Egypt in recent years. But in the course of reviewing yet another video of Scott Carroll uploaded in 2015 (described in more detail here), I noticed a couple offhand remarks that were potentially illuminating in regard to the question of at least one of the sources of the Green Collection’s mummy masks. While describing how he goes about evaluating the papyrus cartonnage from mummy masks that he purchases, at about the 23:25 mark in this video, Scott Carroll says the following:

“Even my wife has been with me in these crypts. You know, underneath Oxford University, looking, you know,. . . and you’re looking at these mummy masks. . .“

And at the 18:10 mark in this video, while again discussing the source of his materials:

“. . .The papyri, the cartonnage, mummy coverings and things–those things were collected, uh, in the 1920s, the 1930s; and they’re in boxes underneath universities and in private holdings in different places. . .”

The connection with Oxford University raises flags. I was aware that the Green Collection has purchased from organizations affiliated with Cambridge University before (the Codex Climaci Rescriptus, bought by the Green Collection in 2010 from Westminster College, Cambridge), but I’m not aware of purchases from Oxford. What location in Oxford might Carroll be describing? Oxford no doubt has numerous buildings housing ancient Egyptian remains (the Ashmolean Museum of course comes to mind). But there is also some online documentation, in the form of a series of alamy stock photos taken in 2005, of another room at Oxford containing numerous Egyptian mummy masks in boxes: 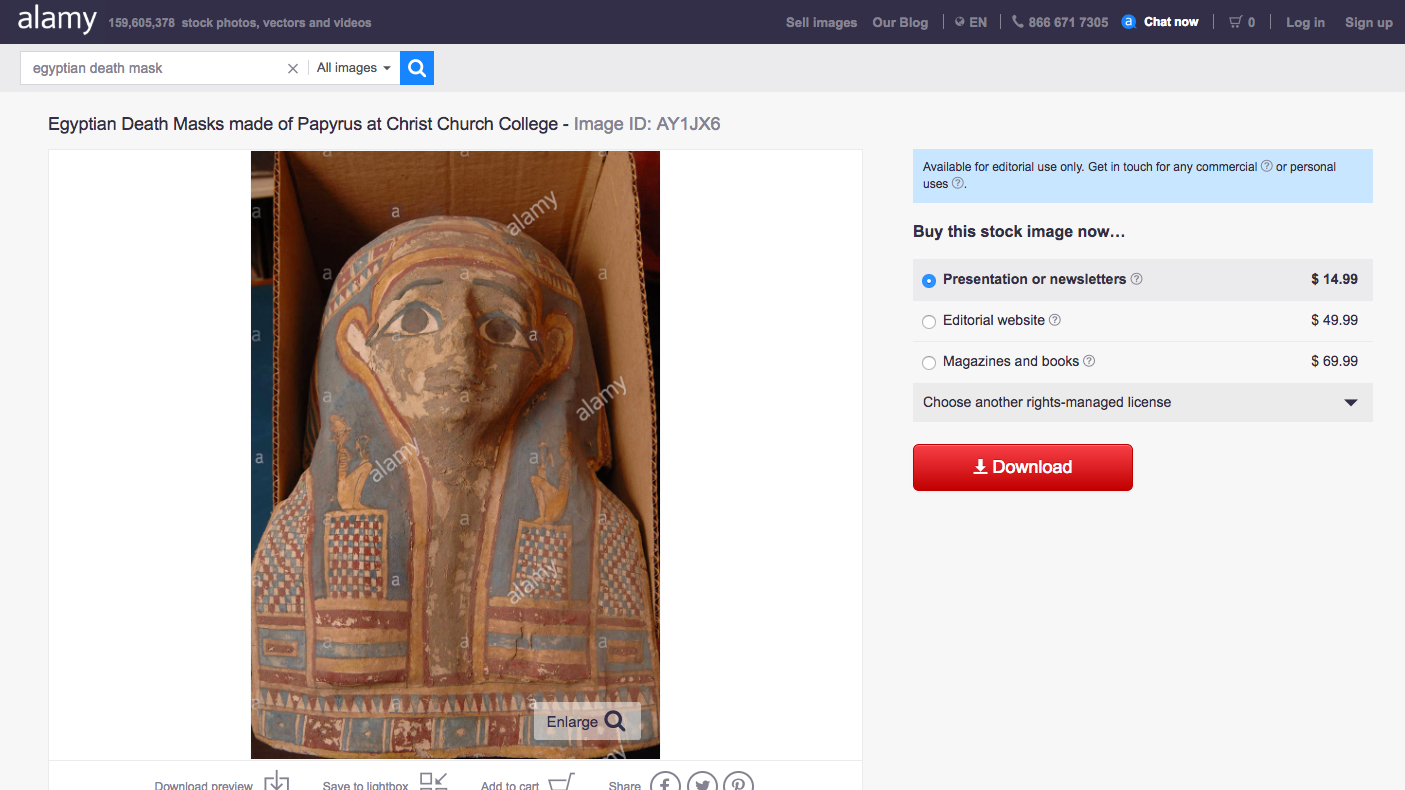 If the caption in this photo is correct, this mask is at Christ Church, Oxford. The masks depicted in this series resemble some of those excavated by the Graeco-Roman Branch of the Egypt Exploration Society: 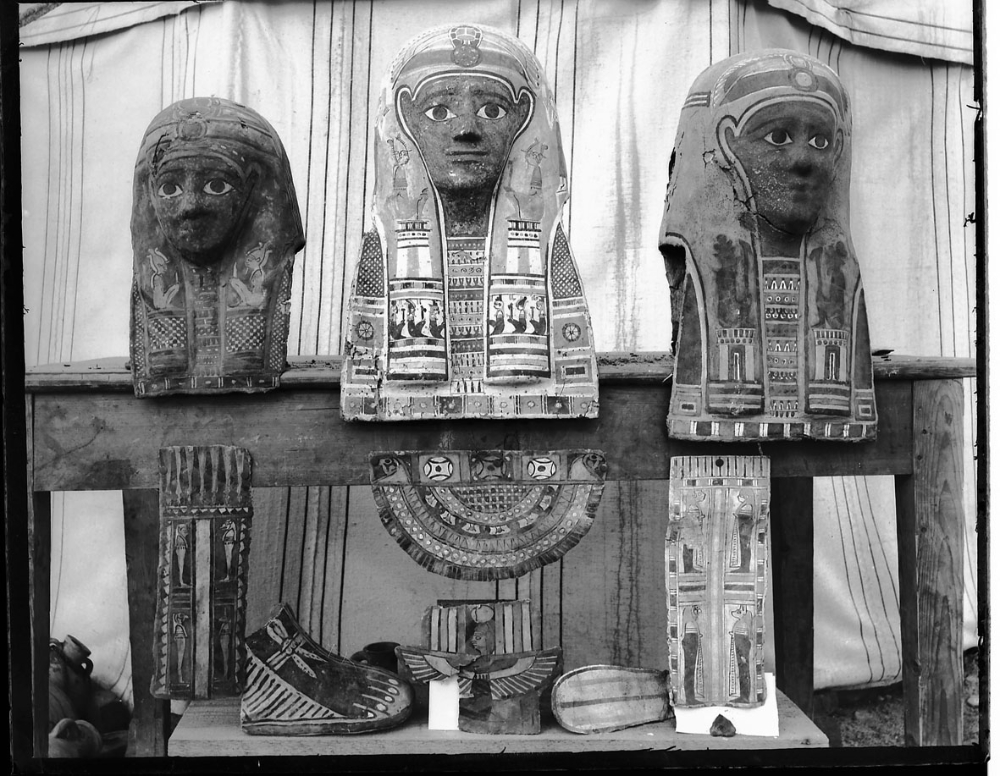 And the storage methods also resemble the some of the techniques used by Grenfell and Hunt for storing papyri, such as the metal boxes in the background of the two photos below: 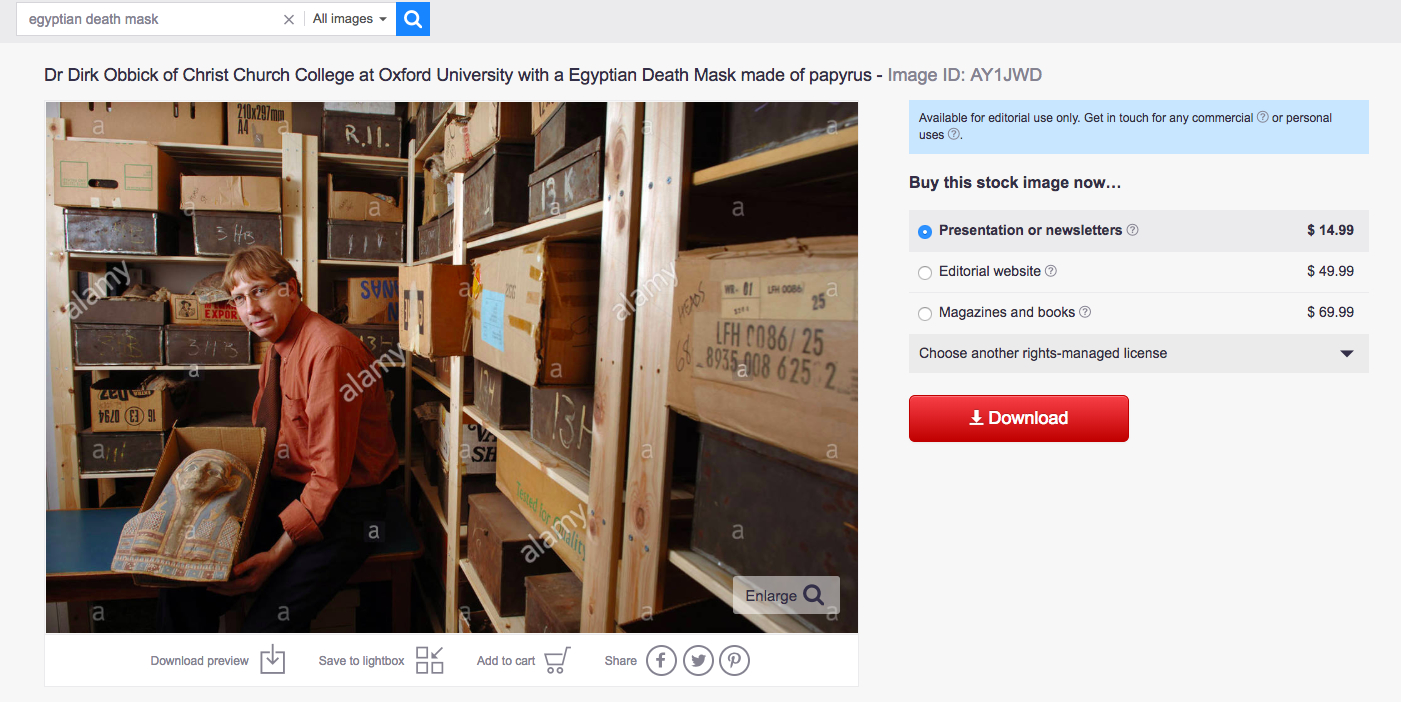 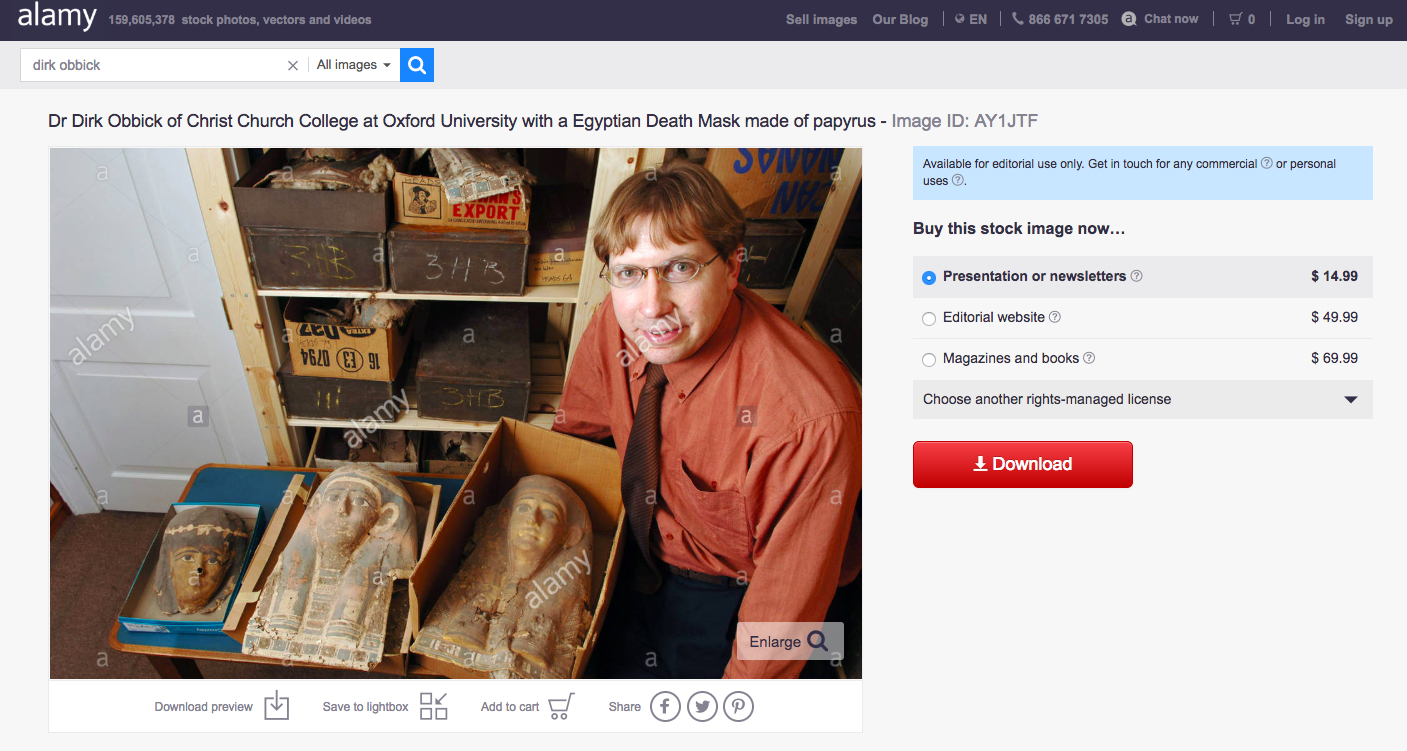 The gentleman in the photos is Professor Dirk Obbink of Christ Church, Oxford, who has at times over the years been associated with the Green Collection in different capacities. (It would be interesting to learn whether the masks in these images are the personal property of Professor Obbink or the results of EES excavations.) In the early days of the “Passages” exhibitions, Professor Obbink was featured quite prominently in the promotion of the Green Collection and what was then known as the Green Scholars Initiative. 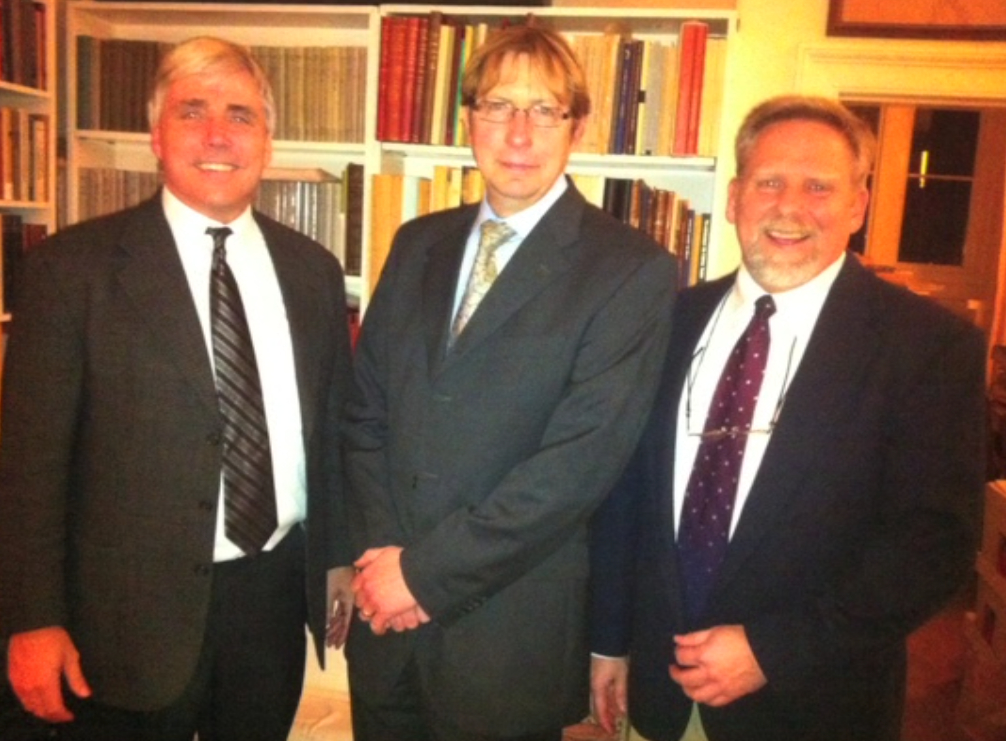 Professor Obbink appears twice in the listings of “Passages” Speakers Series lectures, once with a talk on “Papyri Discoveries and Bible Translation” (September 2011) and once for a joint presentation with Jerry Pattengale entitled “Unveiling Cartonnage: The Practice and Value of Dissolving Reused Papyri Manuscripts for Biblical Studies” (December 2014). At roughly the same time, Professor Obbink was also editing papyrus fragments of Sappho, some of which had been acquired by Scott Carroll and were at one time said to have come from mummy cartonnage. A Tweet of 30 May 2013 from the @PassagesExhibit account suggests that Professor Obbink was actively dismantling mummy cartonnage in those days:

The link in the Tweet eventually leads to this image: 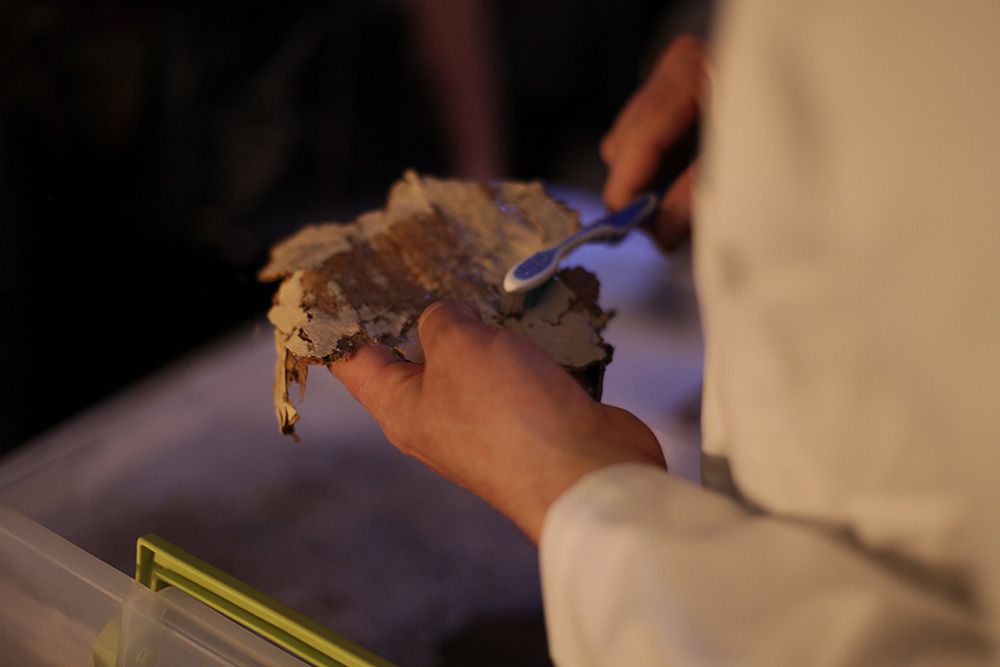 The image seems to be part of a VIP event held in association with the “Passages” exhibit in Colorado Springs in 2013, in which Jerry Pattengale and Professor Obbink dismantled a mask (presumably one owned by the Green Collection) for a crowd of spectators. This was mentioned by Jerry Pattengale in the “Passages” Speaker Series videos (again, thanks to David Bradnick for screen shot): 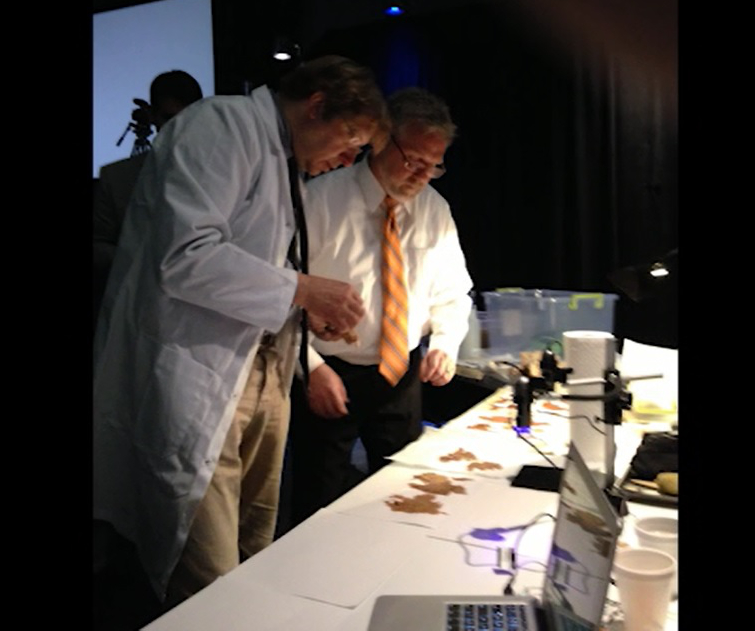 In any event, the close association between Pattengale, Carroll, and Professor Obbink (as well as the Green Collection and Oxford) has long been known, and Professor Obbink . was affiliated in some respect with the Museum of the Bible through 2017 [Update: See Mike Holmes’s comment below]. What was news to me was Carroll’s suggestion that Oxford was a source of the mummy masks that he was purchasing (his usual practice in describing provenance in these more recent videos is to say the material comes from “families” looking to sell things).

Scott Carroll has also suggested that Professor Obbink offered at least one artifact from the Egypt Exploration Society’s collection for sale (the Oxyrhynchus papyrus P.Oxy 83.5345, a fragment of the Gospel According to Mark).  Professor Obbink and the Egypt Exploration Society have both denied Carroll’s claims in regard to that papyrus. [[Update 9 July 2019: Mike Holmes has provided documents that suggest Professor Obbink allegedly offered at least four items in the Egypt Exploration Society’s collection for sale to Hobby Lobby. And, according to Museum of the Bible records, Professor Obbink legally sold other manuscripts to the Green family.]] Now we would seem to be in a similar situation with regard to the Green Collection mummy masks, in that all we really have connecting the Green Collection masks to Oxford is the word of Scott Carroll. And once again, it is the Green Collection and the Museum of the Bible that could shed light on these questions by offering some transparency in their acquisition records for these artifacts.

Addenda (6 February 2019): Two quick notes: I should add that in this video, Scott Carroll mentioned that “a number of mummy heads” (4:33) were also present during the alleged negotiations with Dirk Obbink for the sale of “first century Mark” (P.Oxy. 83.5345). And here is a shot of another gilded mummy mask used in a promotional video for the Museum of the Bible that was uploaded in August 2015: 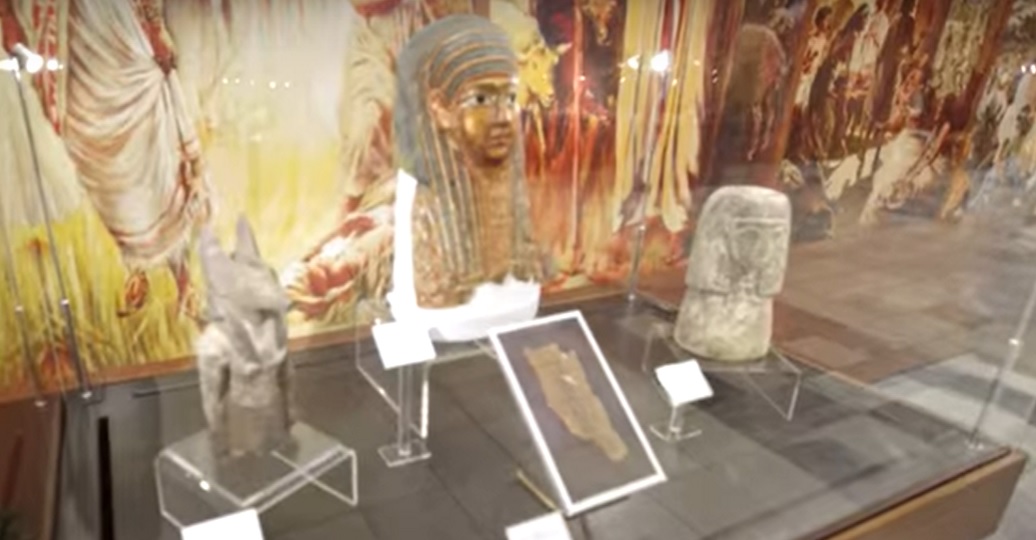 30 Responses to The Green Collection Mummy Masks: A Possible Source