Codices Made from Reused Documents

Typically, ancient papyrus codices were made by cutting off sheets from a long roll of blank papyrus, stacking the sheets, and folding them into quires. There is, however, a small group of somewhat odd papyrus codices that were made in a different way. A number of papyrus codices, some of which can be associated with the Egyptian city of Panopolis, were made by reusing the blank sides of documentary rolls. Two papyrus rolls containing old documents were glued to one another by pasting together the written sides (with horizontal fibers) to create a double-thick roll of papyrus with two blank sides (with vertical fibers). This double-thick roll was then cut into sheets which were folded into a quire to form a kind of codex.

Because it was so well preserved, probably the best known example of this type is the tax codex in the Chester Beatty Library, which is a part of the so-called “archive of the descendants of Alopex.” This single quire composed of double-thick papyrus sheets contained a personal collection of tax receipts from the years 339-345 CE. The codex was disassembled in the 1950s, and the “recto” sides of the two pasted rolls were found to contain official correspondence from the years 298 and 300 CE. In 1964, Theodore Skeat published the text of the “recto” (the older official correspondence on the rolls, now known as “P.Panop.Beatty” copied along the fibers), while the “verso” texts (the more recent accounts copied in the codex against the fibers) were published a few years later and now known as part of the “P.Panop.” series. The Beatty tax codex gives us a good sense of what one of these books looked like in finished form:

And the images of the sheets after the pasted rolls were peeled apart gives us an idea of the original reused documents: 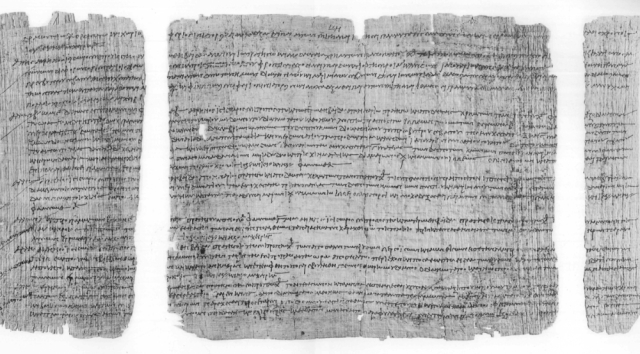 As the image makes clear, a single column of writing in the official document had a width greater than that of the sheets cut for the tax codex. The gaps in the roll show us that the fore-edge of the codex was trimmed after the quire was made in order to even out the appearance of the leaves in the bookblock.

In the case of the Chester Beatty tax codex, the reuse of the codex was of a documentary nature. There are, however, some examples of Christian literary works that were preserved in this type of codex composed of reused documentary materials. I will discuss them in future posts.

This entry was posted in Chester Beatty Papyri, Codices. Bookmark the permalink.

4 Responses to Codices Made from Reused Documents