A question from a commenter on a recent post prompts me to write up a quick discussion of the history of the word “cartonnage” and its current use to describe both mummy casings and the covers of some ancient books. As far as I know, this term was first adopted by Anglophone Egyptologists in the nineteenth century to talk about the material sometimes used to make mummy casings. Thus, in his famous 1834 treatise on mummies, Thomas Pettigrew described a mummy’s case “made of many layers of cloth cemented together” and commented that “the case I am describing is called by the French ‘Cartonage,’ from the resemblance of its composition to pasteboard” (A History of Egyptian Mummies [Longman, 1834], p. 116). The usage was extended to other kinds of coverings for mummified bodies. Consider this remark by W.M. Flinders Petrie describing a mummy of the Ptolemaic era from Hawara in a publication of 1889:

The cartonnage of the mummy is of four pieces: (1) the head and shoulders, with gilt face, and painted on the top and sides with figures of gods, etc.; (2) a pectoral, usually four-sided and somewhat tapering, painted with wings, Anubis standing over the deceased on a bier, deities seated, etc., or sometimes a pectoral of aegis form; (3, 4) sandals of purely ceremonial nature–flat pieces of cartonnage of foot form placed under the outermost turn of bandage, painted with a pattern…

On the same page as this description Petrie adds a footnote:

Some purists may object to the use of this word for any material not of the pulpy nature of paper (carton); but as the pulped material is always covered with stucco, and this stucco imperceptibly varies in thickness up to a massive layer, it is hardly possible to limit cartonnage so as not to include layers of papyrus or of canvas covered with stucco, which is here the material (Petrie, Hawara, Biahmu, and Arsinoe [London: Field & Tuer, 1889], p. 14)

These examples seem to me to cover the common range and ambiguities of the term “cartonnage” as used by early Egyptologists. During the third and second centuries BCE, the makers of this “cartonnage” of human and crocodile mummies sometimes used inscribed waste papyrus, which archaeologists of the late nineteenth and early twentieth centuries eagerly tried to extract when they found the mummies.

Crocodile mummies from Tebtunis; image from the Egypt Exploration Society

At the time, these inscribed papyri provided a vast collection of new evidence for the history of Ptolemaic Egypt. Again, Petrie’s excavations provide us with an example, and again, his colleague Archibald Sayce described Petrie’s papyrus discoveries: 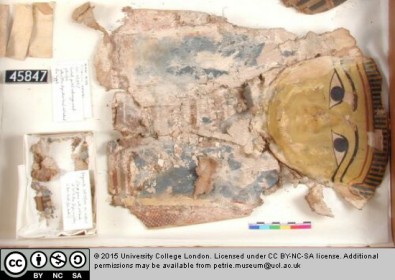 At Gurob Mr. Petrie discovered a small cemetery of the Ptolemaic age, where the dead had been embalmed in the Egyptian style and buried in mummy cases and coffins. These he dug up, and on examining the cartonnage of which the head-pieces and breasts of the cases were composed, came to the conclusion that it was—in many instances at all events—made up of pieces of inscribed papyrus. Practical experiment proved that his conjecture was right, and further showed that the papyri were mostly inscribed with Greek texts, though a large part of them contains demotic texts. An examination of their contents has made it clear that the Egyptian undertaker, before making a mummy case, bought the waste-paper basket of one of his neighbours, and turned the papers that were in it into papier-mâché for the particular mummy-case he had on hand. Hence it happens that the papyri coming from a particular mummy all belong to the same collection, the cartonnage of one mummy case, for example, being composed of letters and documents relating to a certain Kleôn, that of another of the papers belonging to Diophanês, and so on. …Many of the fragments are dated, and in all the various collections the dates belong to the same period. This is the latter part of the reign of Ptolemy Philadelphus. …Roughly speaking most of the documents belong to about B.C. 250. (Petrie, Illahun, Kahun and Gurob 1888-1890 [London” David Nutt, 1891], p. 34)

Thus, the use of the term “cartonnage” was well established for speaking about mummy casings, including those containing inscribed papyri, already in English writing of the early twentieth century.

Now, the covers of ancient books had been taken apart already in the late nineteenth and early twentieth centuries, but, as far as I know, the word “cartonnage” was not in general use to describe these constructions. Rather, the papyrus was simply described as “reinforcement” or “cardboard.” Thus, in the early twentieth century, the conservator Hugo Ibscher (1874-1943) could describe the leather cover of the Berlin Coptic Proverbs codex as follows: “The book cover consists of 6-8 papyrus sheets, which are glued together to produce a strong cardboard [eine starke Pappe]. The outer sheets of this cardboard contain remains of Greek letters, while the inner sheets are apparently blank” (published posthumously in Alexander Böhlig, Der achmimische Proverbientext nach Ms. Berol. orient. oct. 987 [Lerche, 1958], p. xxv).

To my knowledge, the earliest uses of the term “cartonnage” to refer to the papyrus stuffing of leather covers of ancient books come in the context of James Robinson’s work on the Nag Hammadi codices in the 1970s. The first scholars of the Nag Hammadi codices seem not to have used this term. So, for example, Jean Doresse used this description: “On the interior, the covers are stiffened with glued papyrus [A l’intérieur, les plats sont raidis par du papyrus contrecollé]” (Revue d’Égyptologie 13 [1961], p. 38). Similarly Martin Krause and Pahor Labib wrote “On the inside of both covers many older papyri…have been glued together for reinforcement [zur Verstärkung aufeinander geklebt worden]” (Gnostische und hermetische Schriften [J.J. Augustin, 1971], p. 2, note 3).

It seems that Robinson introduced the word “cartonnage” to describe this material—for example, “Blank cartonnage lining the cover and held in by the edges of leather that were folded in and pasted down…” (The Facsimile Edition of the Nag Hammadi Codices: Codex VI [Brill, 1972], p. ix). I’m happy to be corrected on this if anyone has earlier references to “cartonnage” being used to describe the covers of ancient books.

UPDATE 5 December 2017: Well, it only took a day to find an earlier reference: It looks like Victor Martin and Rodolphe Kasser was using “cartonnage” to describe the covers some of the Bodmer codices already in the 1960s. From the introduction to P.Bodmer XIV-XV: The papyrus fragments in the leather cover of that manuscript were “superimposed in several layers, and forming a kind of cartonnage clearly intended to strengthen the binding (superposés en plusieurs couches, et formant une sorte de cartonnage manifestement destiné à renforcer la reliure)” (Martin and Kasser, Papyrus Bodmer XIV-XV [Bibliotheca Bodmeriana, 1961], p. 9).

Update 8 December 2017: We can push it back to 1958: Kasser’s introduction to P.Bodmer III: The covers of the book were formed of quires of reused papyrus, in which “the leaves were glued together to form a cartonnage (les feuilles agglutinées formaient un cartonnage).”

2 Responses to Cartonnage (Mummy and Otherwise)

Ancient Stories from the Ancient Past