A Manuscript of Job in Coptic from Karanis 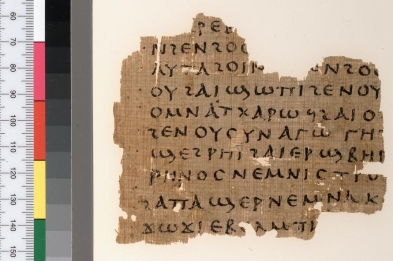 In my previous post, I discussed a fragment of the Psalms in Greek excavated during the University of Michigan’s campaigns in Karanis. The Michigan excavators also found some Coptic literary material at the site. In 1979, Gerald M. Browne published a volume of Coptic texts in the University of Michigan collection (thanks to Alin Suciu for helping me consult this surprisingly-hard-to-find publication). Among these pieces was one that Browne noted was excavated at Karanis in the 1928/1929 season, P.Mich inv. 5421. It was a fragment of a papyrus leaf from a codex containing Job 30:21-30 in Coptic that Browne described as being characterized by “dialectical fluidity.” He estimated the page dimensions as about 14 cm square and stated that “both codex typology and individual letter forms place the text early, probably in the fourth or early fifth century.” The verso page shows an interesting paratextual feature in the form of dots placed in the left margin beside each line of text.

In a 1994 publication, Peter van Minnen provided more precise information about the archaeological context of the fragment and suggested a revision to its dating on the basis of that context:

“For one of these [Coptic literary papyri], a fragment of Job in early Sahidic published in 1979, we even know exactly in which structure in Karanis it was found along with several documentary papyri and ostraca. These texts date from the third or fourth century A.D. and suggest a date for the fragment of Job about a century earlier than the date given by the editor (fourth or fifth century A.D.). We are able to take the archaeological context of this literary papyrus into account thanks to the excavations undertaken by the University of Michigan in this late antique town more than sixty years ago.”

In a footnote, van Minnen helpfully provided some of the details that led him to this conclusion:

“Based on an examination of the published and unpublished data from house B 168 accessible to me. Three ostraca were published as OMich. I 692-694. For OMich. I 694 see now SB XIV 11458. The text may well be Coptic like the fragment of Job discussed in the text.”

A closer examination of this material, however, suggests that the revised dating based on the archaeological context might not be so clear cut. Let’s first look at the ostraca that were mentioned. These pieces were published by Liev Amundsen in 1935. All three items come from the final section of Amundsen’s publication, a kind of miscellany that he called “fragments and uncertain texts.” And a quick look at his editions confirms that these texts are indeed obscure. The basis of their dating is by no means clear. I reproduce his short editions here:

As none of these pieces is securely dated, they do not really provide a reliable guide for assigning a date to the Job papyrus. I was only able to locate an online image for one of the pieces (693), and it confirms the generic character of the writing of these ostraca.

There are additional unpublished pieces from this context as these ostraca, but none of them seems to provide helpful clues for dating the fragment of Job (these are the pieces inventoried at P.Mich. inv. 5418, 5419 and 5668).

And there are problems at an even more fundamental level. The structure in which these papyri and ostraca were found is designated B168, which contains several distinct rooms. The ostraca mentioned by van Minnen all come from the space labelled B168K, a courtyard. The Job papyrus carries the number 28-B168L-B, which indicates that it comes from B168L, the southwest room of the structure. The stratigraphy of these spaces seems to differ.  The structures of the earlier “Phase B” were covered by, incorporated into, or adapted for the latest occupation at the site, “Phase A.” But these transformations were not always uniform across a given structure. Side-by-side images may provide some guidance:

Images adapted from top plans in Boak and Peterson, Karanis: Topographical and Architectural Report and Husselman, Karanis: Excavations of the University of Michigan in Egypt 1928-1935.

While the courtyard B168K was below an open area of uncertain character, the room B168L was only partly below that area. The southern portion of the room was beneath another poorly preserved wall and later structure. Thus, unlike the context in which the Psalms papyrus was found, the character of structure B168 (and at least part of the space B168L) as a sealed locus is subject to some doubt. It is unclear whether there was any paved or otherwise sealed surface over the area that would have contained the fill above the northern part of B168L. The possibilities of disturbance and later intrusion into the context are real. And even if the Job papyrus did come from a sealed locus beneath the “A” phase in this area, the date of the “A” phase structures is unclear, and so there is no definite terminus ante quem for the material below the “A” phase.

The main point here is that van Minnen’s redating of the Coptic Job papyrus is not as straightforward as it might seem. The papyrus certainly could be as early as the turn of the fourth century, but the archaeology of its find spot does not compel us to reach that conclusion.

This entry was posted in Archaeological context, Codices, Michigan Papyri. Bookmark the permalink.

5 Responses to A Manuscript of Job in Coptic from Karanis