P129: Some Questions about a Papyrus of 1 Corinthians

[[Update: The papyrus fragments of Romans and 1 Corinthians discussed in this post were among those stolen from the Egypt Exploration Society. See details here.]]

On a few occasions, I’ve mentioned a fragmentary papyrus leaf containing 1 Corinthians in the Green Collection, GC.PAP.000120 (which has been assigned the number P129 in the INTF Liste). In one of Scott Carroll’s videos from 2018, this papyrus was featured along with an additional fragment said to be from the same manuscript. The “new” fragment is on the right side of the slide shown here, while the Green Collection portion is on the left:

Slide from a talk by Scott Carroll showing fragments of a papyrus of 1 Corinthians (P129); image source: “Stones and Scriptures”

Now, thanks to some clever detective work by David Bradnick, we have some more information about this new fragment. But first, here is what Carroll had to say in the 2018 video:

“So, this is 1 Corinthians. Alright? They’re not the same color, but the exact same papyrus. . . This might be, um, the second earliest papyrus of the New Testament in the world. It’s just not published yet.”

A couple weeks ago, we observed that some of the manuscripts that have featured in Scott Carroll’s more recent videos had been on display in Belarus in 2018 and are apparently normally housed at the Korea Christian Mission Museum in South Korea. David Bradnick’s continued investigations led to the discovery of an online guide to museums in Belarus that indicates that the “new” fragment of P129 was apparently also on display in Belarus and among those pieces now owned by this Korean museum [[Update 23 July 2019: These “new” fragments of 1 Corinthians and Romans are owned by Andrew Stimer (via ETC)]]: 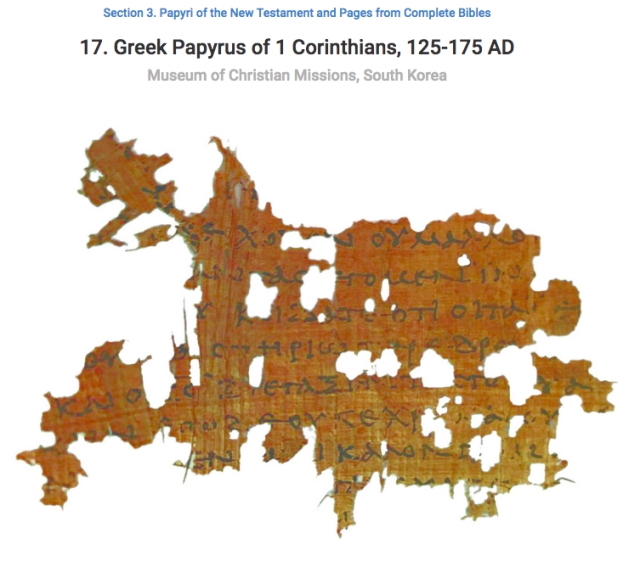 So, one piece of this papyrus is in the Green Collection, and another is in the Korea Christian Mission Museum. And the common denominator is. . .Scott Carroll, which raises some interesting questions. Was Carroll unaware of this piece when he was working for the Green Collection? Or did he simply withhold it from them? And, as always, what was Carroll’s source for these pieces?

A couple more odd things here: First, when the existence of this papyrus first became publicly known back in 2011, the contents were said to be simply 1 Corinthians 8:10-9:3 + 9:27-10:6. But at least as early as 2015, the INTF Liste gave the following contents for the papyrus:

So, the INTF seems to have been aware of additional pieces of this papyrus for several years [see the Update below]. I wonder who provided them with the information about this papyrus and when they did so? What’s also strange is that the new fragment that Carroll displays doesn’t really line up properly with the additional bits of  P129 given in the Liste. The only photo of the “front” of the new fragment is the reduced in image in Carroll’s slide from 2018. It is not at all clear (amazingly, it’s both upside down and somehow backwards on Carroll’s slide), but I’m reasonably sure I see parts of 1 Cor. 7:34-37, which only partly overlaps with the verses listed by the INTF. On the “back” side, for which we now have a much more legible photo, we can clearly see parts of 1 Cor. 9:11-16, which again only partially overlaps with the additional pieces known to the INTF. Curious. If anyone at the INTF is reading this, it really would be great to know who reported the data in the Liste and when they did so.

[[Update: Mike Holmes informs me that the two “additional” passages given in the INTF Liste (1 Cor. 7:36-39 and 9:14-17) are actually to be found among the smaller fragments below the main fragment in the frame containing the Green Collection’s portions of P129. Thus, the INTF Liste does not record the contents of the “new” fragment that has been displayed by Carroll and is apparently in the museum in Korea.]]

Slide from a talk by Scott Carroll showing fragments of a papyrus of Romans (P131); image source: “Stones and Scriptures”

Here is what Carroll says in the video while this slide is showing:

“This is a papyrus of Romans–Hey Denise, so this is the papyrus of Romans that was cut, and see how they fit together? And that’s the back side. She knows what I’m talking about. Alright. They’re a different color, but that’s just the photographs.”

According to the labels on the lower images, these new fragments preserve parts of Romans 9:21-22 and 10:3-4. These verses are not present in the entry for P131 in the INTF Liste. I don’t think Carroll  has mentioned the whereabouts of this additional fragment. But the same questions we posed about P129 also apply here: Was Carroll unaware of this piece when he was working for the Green Collection? Or did he simply withhold it from them? And we also shouldn’t forget that the Green Collection portion was one of those pieces sometimes claimed to have been found in a mummy mask.

It is also worth noting that several other pieces that have featured in Carroll’s recent lectures also seem to be now at the museum in Korea, such as the following copies of the Iliad, Aesop’s Fables, and Exodus: 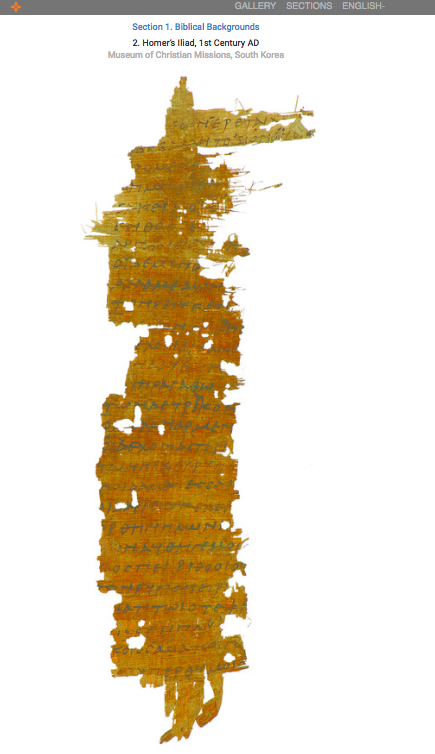 According to the “Long Description” on the website, “This papyrus was doubtless damaged and discarded in antiquity. It was recycled (or repurposed) with other discarded papyri to make the infrastructure of a mummy covering. It was later extracted. Many important papyri have survived in this way.” 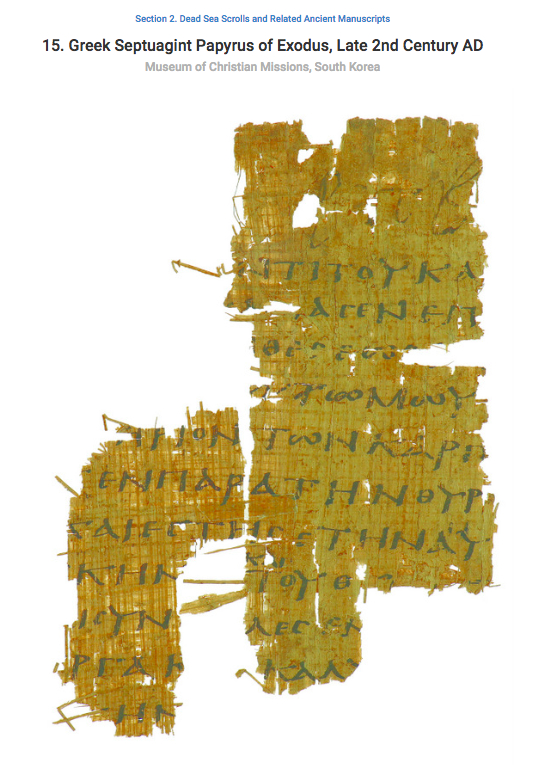 Finally, in addition to several facsimiles in the exhibit, there was also a piece I do not recall having noted in Carroll’s lectures, a metal amulet with Greek text and a drawing: 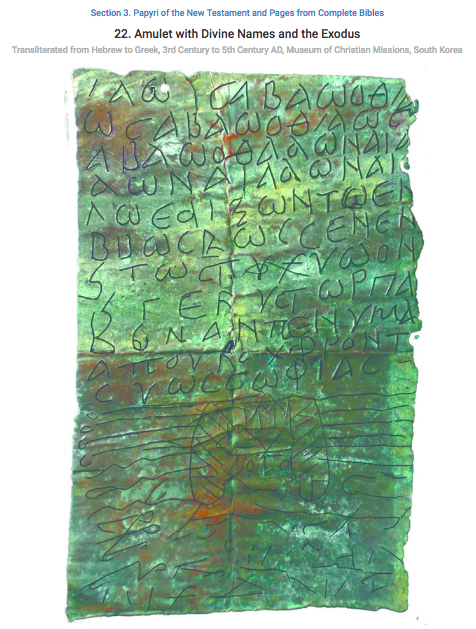 While it’s good to know the current location of these pieces, we are of course still completely in the dark as to the source of these manuscripts before they came into the hands of Scott Carroll.

6 Responses to P129: Some Questions about a Papyrus of 1 Corinthians