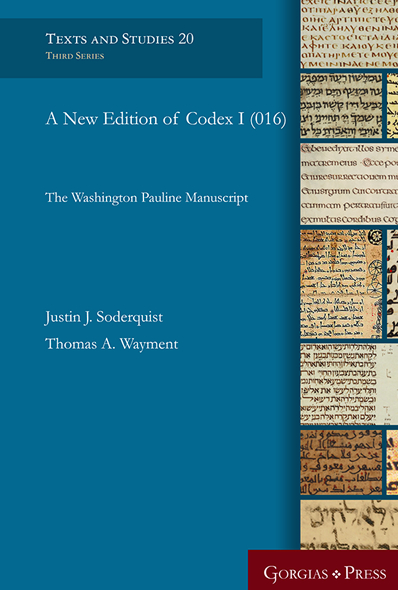 Thanks to Gorgias Press for sending along a copy of the new edition of the Freer Codex of Paul’s letters (Gregory-Aland 016, LDAB 3044) produced by Justin Soderquist and Thomas Wayment.

The American railroad magnate Charles Lang Freer bought this damaged parchment codex in Cairo in 1906 together with three other early Christian manuscripts. One of these books was a well preserved copy of the four gospels in Greek, complete with wooden covers (LDAB 2985). But unlike the better preserved and more aesthetically pleasing codex containing the gospels, the Pauline epistles codex did not survive the ravages of time so well. This is what it looked like when Freer bought it:

Nevertheless, a considerable amount of text of Paul’s letters was recovered from 84 leaves after they were separated with “a thin-bladed dinner knife.” The remains of the codex were thus published in 1918 without the type of luxurious facsimile edition produced for the gospels codex. This 1918 edition, part II of Henry Sanders, The New Testament Manuscripts in the Freer Collection (New York: Macmillan, 1918), is available online at archive.org.

The readings of the Freer Pauline epistles codex were duly noted at the time of publication, but the codex has received little attention since that time. In a 2004 JBL article, Wayment reported on newly identified variants in the codex discovered with the help of new digital color images and multi-spectral images (MSI) made in 2002-2003. Wayment also contributed a short chapter on the scribal characteristics of the codex to the volume on the Freer codices published by the Society of Biblical Literature in 2006.

Using the color and multispectral images, Soderquist produced a new edition of the codex as an MA thesis in 2014 (a thesis for which Wayment was a reader). The thesis seems to have provided the basis for the edition now produced by Gorgias Press, in which Soderquist and Wayment provide an up-to-date introduction to the codex and a new transcription.

The introductory material is generally well-informed and judicious, although I would question one view repeatedly attributed to Sanders:

“Sanders assumes that Codex I was organically connected with Codex Washingtonensis that contained the four gospels. That codex was bound with painted covers, and its textual association with Codex I remains unclear despite Sanders’ assertion. If the two manuscripts originated from the same location, then they may have been used by the same community, but there is no surviving evidence to indicate that they functioned as a single codex, and the covers of the gospels codex exclude the possibility that they were joined in a physical way” (p. 6)

The reference in the edition of Sanders that prompts this observation reads as follows:

“The preservation of ten quire numbers, including the last (KZ), makes certain the original size and content of the MS. It once contained between 208 and 212 leaves. The legible fragments begin at 1 Corinthians 10, 29, and portions of all the remaining Pauline epistles are found. The Epistle to the Hebrews follows II Thessalonians. There have been lost at the beginning of the MS fifteen quires and two leaves. On the basis of the amount of text per page in the preserved portion we may reckon Acts at about sixty leaves or eight quires, of which the last was probably a four-leaf quire; the Catholic Epistles would fill 24 leaves or three quires, and the Epistle to the Romans with the missing part of I Corinthians would require some 34 leaves, i.e. just over four quires. This was then the content of the original MS. Joined with the MS of the four gospels found with it, it made a complete New Testament, which did not however contain Revelation” (Sanders, New Testament Manuscripts, p. 252)

Thus, Soderquist and Wayment are surely right that these two books were never physically bound together, but I don’t think that Sanders ever implied that they were. His statement here seems to refer quite clearly to the books as a collection, not as a codicological unity. Sanders does occasionally refer to the manuscripts as “parts of a Bible,” but on such occasions, he seems to be using the term “Bible” in the sense of “library” rather than the in the sense of “codicological unit.” For instance, in one of his first reports about the manuscripts, Sanders described the books in the following way: “The four manuscripts are of different sizes, shapes, and ages, but they apparently once formed volumes of a single Bible, so I shall refer to them by the Roman numerals I to IV in the order in which they would have stood in that collection,” American Journal of Archaeology 12 (1908), p. 49.

In terms of the transcription, the new edition of Soderquist and Wayment is more conservative than that of Sanders, who, as he phrased it “tried to determine the position of the MS regarding many [variants] which fall in lines partly lost” (Sanders, New Testament Manuscripts, p. 259) Soderquist and Wayment stick to what they can see in the images and thus supply considerably less conjectural text than Sanders. At the same time, they provide a fuller (and obviously more up to date) apparatus for the text. In some instances, however, Soderquist and Wayment offer quite different readings from those presented by Sanders. An extreme example is the page labelled 6. Here is the reading of Sanders, who takes the remains as part of 1 Cor. 12:14:

And here is the reading of Soderquist and Wayment, who interpret the remains as a part of 1 Cor. 12:16:

Soderquist and Wayment do provide a photograph of this page of the codex as Plate 2:

I can’t make out the correct reading from the plate with certainty, but Soderquist and Wayment provide a thorough and helpful discussion of their decision making process both here and in other cases where their readings differ substantially from those of Sanders.

The book concludes with several data-rich appendices on different topics (terminal nu, line-ending or terminal sigma, enlarged letters with ekthesis and paragraphoi, nomina sacra, textual variants, and orthography), which again are largely based on the work in Soderquist’s 2014 thesis.

Anyone who now wishes to refer to the readings of this codex will want to make the edition of Soderquist and Wayment their first stop.

The 8 photographic plates included in the book are helpful. I would have liked to see plates of all the new color images included in the edition, but this would have likely made the volume even more expensive. And unfortunately, the plates are not as detailed as I might have hoped. I understand that they were made from digital images taken in 2002-2003, so the lamentably low resolutions (reportedly 240 dpi for the color images and just 72 dpi for the MSI images) are understandable. But it would be wonderful if the digital images themselves would be made available. The quality of the single image of the codex at the Smithsonian website is actually reasonably good.

As a side note: The 1918 edition of Sanders contained only four photographic plates, but I wonder if photographs of the other leaves of the codex were taken at the time of that publication? During my own research in the Freer archives, I saw a number of glass plate negatives of the different codices, and these could be scanned to produce images of excellent quality. Other negatives, however, were of the highly combustible nitrate variety and had to be kept in cold storage. I am unable to say anything about their present condition and quality. It would be good to have an inventory all the extant negatives.

Nevertheless, the improved legibility of the color images is obvious from the selected plates included by Soderquist and Wayment. I provide a scan of one below, showing the image published in the edition of Sanders and the corresponding new image (note the more visible letters in the lower part of the fragment):

Finally, I must report a bookbinding oddity. In my copy, the photographic plates (pages 159-166) appear out of sequence between pages 168 and 169 in the middle of the bibliography.

This entry was posted in Freer Codex of Paul's Letters, Freer Codices. Bookmark the permalink.