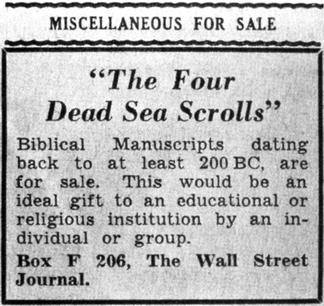 Pretty much everyone with a passing knowledge of the Dead Sea Scrolls will recognize the famous ad in The Wall Street Journal (1 June 1954) placed at the request of the Syrian Archbishop Mar Athanasius Yeshue Samuel. Mar Samuel had brought four scrolls to the US. These were some of the first scrolls that had come to light in late 1946 or early 1947–the well preserved scrolls said to have come from “Cave 1”– the Isaiah Scroll (1QIsaa), the Rule of the Community (1QS), the Habakkuk Pesher (1QpHab), and the Genesis Apocryphon (1QgenApoc). Until recently, however, I was unaware that there was newsreel footage in the Sherman Grinberg Film Library of the publicity tour put on by Mar Samuel shortly after his arrival in the US in 1949. It’s fascinating to see the scrolls actually being handled and rolled out (this looks like the Isaiah Scroll being laid out on a table):

In October of 1949, Mar Samuel brought these four scrolls to the US, and they were displayed in a series of venues:

There are a few other clips at the website of the Grinberg Film Library (search “Dead Sea Scrolls”). This footage (along with the similar clips at Getty Images) all relates to the display of the scrolls in Washington, D.C., but it appears there must be other records of these exhibits. In his thorough account of the Dead Sea Scrolls, Weston Fields includes this image from the display at Duke University:

It would be good to learn if there is other existing video footage of the Scrolls at this relatively early date.