Since I began this blog midway through 2017 with a post about Anton Fackelmann and some of the papyri he allegedly removed from mummy cartonnage, I thought I might close out the old year and open up the new with one more post on Fackelmann’s papyri and their somewhat less-than-clear provenance. The Trismegistos site lists 11 published items from Fackelmann’s collection that have now been dispersed to other collections (although, as I noted before, his collection must have been considerably larger than this—his biographer says the collection consisted of “forty fragments,” 188). The Trismegistos list is thus incomplete. Here is a list of pieces known to me that have been published from the collection of Anton Fackelmann (the first number, when it exists, is the “P.Fackelmann” number usually associated with each piece):

Two other pieces should also be mentioned:

—     TM 2529         Complaint                       Mumienkartonagestück:  This piece was published by Michael Fackelmann. Trismegistos lists it as part of the “Fackelmann collection,” but I have not been able to find a connection to the collection of Anton Fackelmann. Also, in this case, photos of the cartonnage before extraction were also published.
—         —                 The “first century” gospel according to Mark allegedly removed from mummy cartonnage and published in Anagennesis (while the “Mark” is fake, the papyrus does contain what I regard as a genuine Ptolemaic document).

Note that in all cases where a source of the material is given, it is said to be either “mummy cartonnage” or the remains of a book binding. Now, in one way this is not so surprising. In the biography of Anton Fackelmann written by his son, there is a lengthy description of the repurposed washing machine basin that the elder Fackelmann used to extract papyrus from mummy cartonnage (“Fackelmanns mysteriöse Papyrus- oder Mumienwaschmaschine,” 153). But the variety of literary material that Fackelmann claims to have recovered by this method is a bit surprising. Just how much cartonnage had to be sent to the washing machine to recover this number of literary pieces? Or was Fackelmann just exceedingly lucky in the selection of mummy fragments and book covers he supposedly purchased? According to his biography, the latter is the case: “his practically infallible skill in the selection” of mummy cartonnage that would yield inscribed papyri (“seine praktisch unfehlbare Hand im Aussuchen von Mumien, die beschriebenen Papyrus als Inhalt erwarten ließen und diese Kenntnis hatte außer ihm sonst niemand,” 187-188). Now all of this is certainly possible.

But it also seems a little unlikely. Unless I misunderstand, much of this material is said to come from a just one book cover. Fackelmann items 2 and 3 were published in 1978 and were said to have been extracted from the same book cover. Then in 1983, items 10-12 were published and were said to come from the very same book cover, which was purchased in Cairo in 1969 (“Die im folgenden behandelten drei Pergament-Fragmente gehören zur Sammlung A. Fackelmann. Sie sind vom Besitzer aus einem Buchdeckelfragment abgelöst worden: der Buchdeckel wurde 1969 in Kairo erworben. Über Papyrus-Fragmente aus derselben Buchdeckelkartonage vgl. M. Gronewald, Einege Fackelmann-Papyri, ZPE 28 (1978) 271 ff.”). Now, two nice-looking papyri containing Christian literature coming from a single book cover would be fantastic. But to also find three more Christian parchment pieces in the same cover? That should raise some eyebrows. P.Fackelmann 11, for example, is a parchment fragment of a miniature codex. Is there any other example of this kind of artifact being used as waste to make a book cover? While it is common to reuse inscribed parchment for some aspects of bookbinding (like the stays that prevent binding threads from pulling through the folded sheets), it is not very common, as far as I know, to use parchment simply as stuffing for the structure of the book cover.

And here is an interesting fact. In 1984, an Italian scholar pointed out that P.Fackelmann 8, the Isocrates fragment, was actually part of a roll of Isocates that had been published already in 1931, well before Anton Fackelmann started working at the Österreichische Nationalbibliothek in Vienna. The editor of the Isocrates papyrus published in 1931 (known as P.Iand. 5.79) said nothing about this papyrus having come from the cover of a book. It was purchased in Egypt by the Coptologist Carl Schmidt in 1926. It is of course possible that only a part of this roll of Isocrates was used for the construction of a book cover, and the other part just happened to find its way into another collection. But an alternative (and far more likely) possibility is that both pieces were unearthed together around 1926 in clandestine excavations and both were dispersed on the antiquities market.

All of this to say: The provenance of the Fackelmann papyri should probably be regarded with a bit more skepticism than is usually the case. 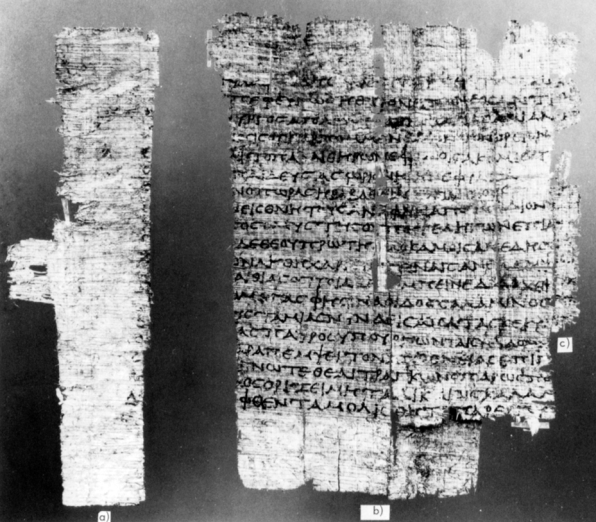 1 Response to Anton Fackelmann and Cartonnage