In my previous post, I tried to direct attention to the source of certain papyri in the Green Collection and/or the Museum of the Bible that seem to have been acquired at about the same time as “first century” Mark was allegedly for sale. A substantive comment to that post by Greg Given brings together some related issues.

So, to recap, the pieces under discussion are, according to the INTF Liste:

Thanks to Greg, I see that an image of P129 is available in the link posted in his comment (the same image was also posted online in 2014 at the ETC blog –fourth photo in the series). To judge from the range of verses given in the Liste, there must be a second fragment in addition to the one pictured.

On P130: I had been under the impression that this piece was the one that was displayed at Baylor in 2011, but I’m now less sure. The fragment displayed at Baylor was identified as preserving part of Hebrews 11, but, as noted above, P130 is said to contain verses from Hebrews 9. And I see elsewhere that Scott Carroll has in the past claimed that the Green Collection had four papyrus copies of Hebrews:

But the tweet can’t be altogether accurate, because by 2010 there were already eight published Greek papyri of Hebrews (I don’t count P12):

So, it’s not completely clear to me what’s going on with P130. We’ll have to wait for the eventual publication or just some further provenance information from the Green Collection and/or the Museum of the Bible.

On P131, I don’t really have anything to add except some pretty unambiguous assertions that the Romans fragment came from mummy cartonnage. In addition to the material from Josh McDowell surveyed by Brice Jones in 2014 (which Greg mentioned in his comment), there is video of Scott Carroll making such a claim in 2013: 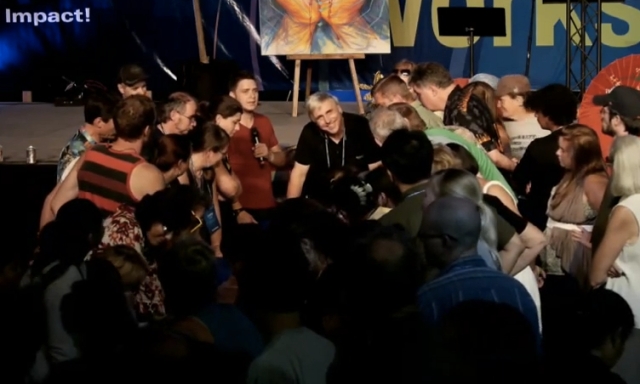 For much of the video he appears to be scrolling through a set of images, listing off his “discoveries” and responding to audience questions.

[at the 28 minute mark] “Ah, we found last year, I found, ah, the earliest known text of Romans, the earliest known texts of 1 Samuel, lost works of Sappho, tons of Homer…[at the 51 minute mark] This. So no one in the world knows about it.  It’s Matthew 12. On the righthand side is also Matthew and Luke dating to around 150. On the lefthand side, again unpublished, is the earliest account of the nativity of Jesus. Luke 2, ah, dating to around 140. On the righthand side is Luke 12 dating before 200. On and on and on. This is an early text of John 3. …[at the 52:36 minute mark] Earliest text of Romans found in a mummy mask.”

A transcript of the video can be found here.

Now, the claim is that the pieces (at least some of them, including the Romans fragment) are coming out of mummy cartonnage. But, as Roberta Mazza pointed out back on 13 May 2014, the practice of using inscribed papyri to make mummy cartonnage seems to have died out in the Augustan period, and there is not a single published instance of a New Testament manuscript being extracted from mummy cartonnage (cases of desperately wishful thinking aside). That is to say, the idea that all of these early Christian texts emerged from mummy cartonnage is highly implausible. And so Scott Carroll accordingly walked back that claim in relation to “first century” Mark in a video from 2015 (or at least sort of walked it back):

“…how it was extracted from a mummy covering. And I did not, I was not involved in that process. When I saw it, I can tell you it was, um, relaxed, which means it was flat, it had, uh, been extracted, if it was extracted from a context like that, um, there’s no evidence of it to me. It looks like it was just a text that was found. Now a lot of texts that come to light in this kind of a context, like if I went back to the pictures, and we looked at the pile, you can see that a lot of this stuff has white on it, and that’s like residue of the, um, plaster. So these things came from mummy coverings…And so they probably were in a burial section or something like that, and over time, it just separated it one from another, but we can look that it was originally part of it. Now this Mark may have been in that kind of a context. I’m not sure.”

Carroll goes on to state that the main person working on the papyrus was Dirk Obbink. Interestingly, at right about the same time, Dirk Obbink also moved away from the claim that the (in)famous Sappho fragments on which he was working came from mummy cartonnage. In the Times Literary Supplement announcement of the papyrus (5 Feb. 2014), the Sappho fragments were said to come from an “ancient mummy cartonnage panel.” When he skyped in for a paper at the Society for Classical Studies meeting in January of 2015, however, the source was no longer described as coming from a mummy:

“The layers of the cartonnage fragment, a thin flat compressed mass of papyrus fragments, were separated by the owner and his staff by dissolving in a warm-water solution. The owner originally believed that he had dissolved a piece of ‘mummy’ cartonnage, as I reported in TLS. But this turned out upon closer inspection of the original papyri not to be the case…[It was] probably domestic or industrial cartonnage: it might have been employed e.g. for a book-cover or book-binding.”

(For a detailed account of the Sappho saga and Scott Carroll’s role in it, see the long post at rougeclassicism from July of 2017).

But even the idea that such large quantities literary papyri of known authors would come from papyri used for book covers is itself somewhat suspect. To be sure, we do get literary papyri from book covers (the leaf of Genesis from the cover of Nag Hammadi Codex VII; the leaf of Isocrates and the ethnographic treatise from the cover of P.Bodmer XXIII, etc.). But the mass of literary material at issue here gives me pause. It is true that Anton Fackelmann is said to have extracted several literary pieces from a single book cover, but I’ve argued there are good reasons to doubt this story.

So again, where are these texts coming from? I’ll end this the way I ended my last post: Now would be an ideal time for the Green Collection and/or the Museum of the Bible to confirm publicly when and from whom these three pieces (P129, P130, and P131) were bought and to document any brokers in the sale.