A couple years ago, Roberta Mazza traced the “modern biography” of a fragmentary papyrus leaf containing the Gospel According to John, P.Oxy. 15.1780 (better known to New Testament scholars as P39). It’s a fascinating article that can be downloaded here. In this post, I take a look at another Christian manuscript with a similarly colorful biography.

It’s a parchment codex usually assigned to the fourth or fifth century containing Jeremiah 40-52, Lamentations, the Epistle of Jeremiah, and Baruch in Coptic (LDAB 108176).  The text of Lamentations is especially interesting. Like many Greek manuscripts of Lamentations, the verses are punctuated with the names of the letters of the Hebrew alphabet in an echo of the acrostic nature of the original Hebrew poem. In some instances in our Coptic codex, the copyist has also drawn the Hebrew letters themselves. In the image below, the names and drawings of the letters resh ר, shin ש, and tav ת can clearly be seen offset from the main text (the latter two letters looking suspiciously like omega ω and pi ⲡ): 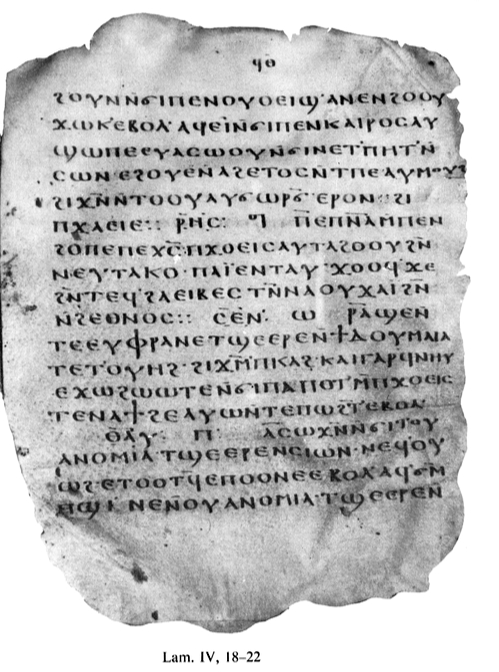 There are actually two stories of the modern life of this codex. It was divided on the antiquities market shortly after its discovery. About half of it was brought to Geneva and offered for sale to Martin Bodmer in the 1950s as an intact bookblock. It subsequently “disappeared” for more than a year, according to its editor (“En effet, le manuscrit, qui avait dû être confié à la Bibliothèque pour examen seulement, en disparut ensuite pendant plus d’une année”). When the manuscript reappeared, its pages had been separated and flattened in a process that, in an interesting turn of phrase, “did not take place without altering clarity of the writing” (“n’avait pas été sans altérer la netteté de l’écriture”). It’s not clear at what point Bodmer bought these leaves, but he also apparently subsequently acquired additional leaves from the codex (Kasser, Papyrus Bodmer XXII, 7, note 2).  Bodmer’s portion of the book remains part of the collection at the Fondation Martin Bodmer as P.Bodmer XXII.

The story of the other portion of the codex has more twists and turns. The rest of the codex was acquired from the Cairo dealer Maguid Sameda apparently in 1955 by David M. Robinson on behalf of the University of Mississippi, as I have outlined in an earlier post. These leaves became known as Mississippi Coptic Codex II (Codex I being the Coptic papyrus book now known as Schøyen Ms. 193, LDAB 107771). In a fortunate act of cooperation, Rodolphe Kasser was allowed to publish an edition of the entire codex—P.Bodmer XXII and Mississippi Coptic Codex II—in 1964 complete with photographic plates of all the leaves. Here is a breakdown of the contents of the books and the collections to which they belonged:

In 1981, the University of Mississippi sold their Coptic codices (see Robinson, The Story of the Bodmer Papyri, 92). The codices ended up going to the New York rare book dealer H.P. Kraus. From there, they had divergent histories. Codex I was first sold to Winsor T. Savery, and then to Martin Schøyen. The leaves of Mississippi Codex II seem to have undergone some fairly drastic changes between the time that the University of Mississippi acquired them in 1955 and the point at which Kraus sold them. When Kraus advertised the leaves of Codex II for sale in 1983, he noted that the manuscript had been “expertly restored and remargined,” by which he seems to mean that the parchment leaves had been attached to a type of conservation paper in a process that apparently involved the application of some kind of moisture to the parchment. The results certainly call into question the use of the adverb “expertly”: 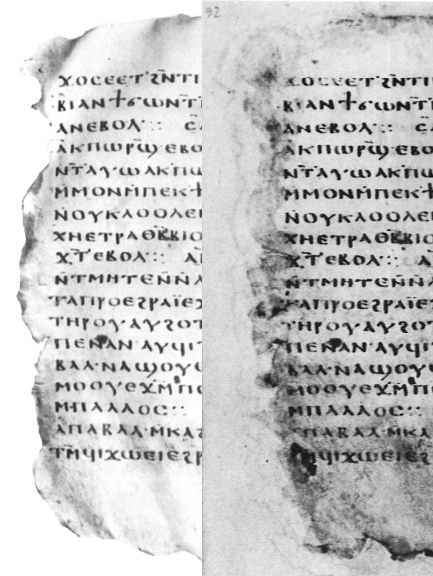 It is unclear whether the University of Mississippi or Kraus was responsible for this damage to the leaves. Kraus seems to have owned the leaves until 1986, when they were purchased by Robert Van Kampen, an investment banker who ranked among the wealthiest people in America in the late 1980s. The leaves then came to be MS. 783 in the Van Kampen Collection. The story of this collection has been outlined by Tommy Wasserman here. While the collection was once housed in Michigan, it seems that the manuscripts in the collection are now on permanent loan to The Holy Land Experience theme park in Orlando, Florida. I have not had the opportunity to see them in their current home, as doing so would not only require the trip to Orlando, but also paying the entrance fee of $50 USD.

Kraus, H.P. Cimelia: A Catalogue of Important Illuminated and Textual Manuscripts Published in Commemoration of the Sale of the Ludwig Collection. New York: H.P. Kraus, 1983.

Robinson, James M. The Story of the Bodmer Papyri. Eugene, Or.: Cascade Books, 2011.

1 Response to The Modern Lives of an Ancient Coptic Book: P.Bodmer XXII + VK 783