In my last post on the use of waste papyrus in covers of ancient codices, I made reference to the Berlin Coptic Proverbs codex (Staatsbibliothek zu Berlin, Ms. or. oct. 987, LDAB 107968). This reminded me that I had intended for some time to make a post dedicated to this book. It is a single-quire papyrus codex containing the book of Proverbs in the Akhmimic dialect of Coptic. It’s generally assigned to the fourth century, although earlier and later dates have been proposed. It was purchased in Cairo by Bernhard Moritz with the help of the Coptologist Carl Schmidt in 1905, and it was in a remarkable state of preservation at that time. Regrettably, there is, as far as I know, only one photograph showing the codex in roughly the state in which it was acquired: 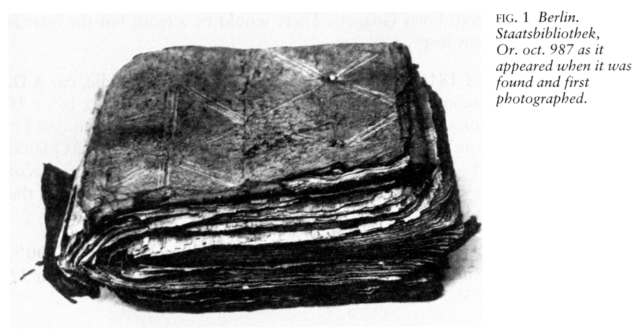 After it was brought to Berlin, the famed conservator Hugo Ibscher took apart the codex and mounted the individual sheets between glass plates, as was the customary practice at the time. Ibscher’s written report (published posthumously by Böhlig) was not very detailed, but it did include some interesting observations. For instance, Ibscher removed the decorated leather cover and commented in passing that some of the waste papyri used to stiffen the cover were inscribed:

“The book cover consists of 6-8 layers of papyrus, which were glued together to form a a sturdy board. The outer layers of leaves of this board contain remains of Greek letters, while the inner are apparently uninscribed (Der Buchdeckel besteht aus 6-8 Papyruslagen, die übereinandergeklebt eine starke Pappe ergaben. Die äußeren Blattlagen dieser Pappe enthalten griechische Schriftreste, während die inneren anscheinend unbeschrieben sind).”

Does anyone know what happened to these papyri? I don’t. It is possible that they are still retained with the cover, which is where they seem to have been when this photograph was taken around 1951.

If the papyri from the cover contain dated documents, they could provide an aid to establishing the date of the construction of the codex. As far as I know, these papyri remain unstudied. I would be grateful if anyone who has further information about them would let us know in the comments.

In any event, this kind of disassembly of a codex was fairly typical in the early part of the twentieth century. Where the story of the Berlin Proverbs codex diverges from that of most papyrus codices is in the late 1950s, when Alexander Böhlig pressed for the rebinding of the codex. In 1958-1959, Rolf Ibscher (son of Hugo, who had died in 1943) carried out the task by covering the papyrus sheets with silk and rebinding them. The original cover was too damaged to be reused, so Werner Kießig was enlisted to create a replica of the cover.

The decision to rebind has benefits and drawbacks. The newly rebound artifact probably gives a decent sense of what the original must have looked like, but the rebinding of the sheets also prevents close study of the original binding technique, so we must still rely on Hugo Ibscher’s sparse report.

At about the same time as this rebinding took place, a full photo-facsimile was produced for sale (1963). The pictures were printed on paper and bound as a single quire (including stubs in the appropriate places!), and it was also bound in a replica leather cover):

And recently, the whole codex has been digitized. All the pages and the new binding can be viewed online at the Staatsbibliothek zu Berlin.

4 Responses to Another Book Biography: The Berlin Akhmimic Proverbs Codex