1 Samuel and the Green Collection’s “Cartonnage”

Thanks to Matthew Hamilton for pointing out that the Green Collection papyrus containing 1 Samuel was described in the catalog accompanying the “Passages” exhibition in 2012. Matthew states that in the catalog, “the papyrus is noted as having 9 chapters [and] is dated to the early 3rd century AD.” Thus, it seems clear that in the video I mentioned in my previous post, Scott Carroll really was talking about “chapters” of the book being extracted from mummy cartonnage. Even more interesting is Matthew’s note that, according to the “Passages” catalog, the papyrus “had been pressed and sewn together and recycled for domestic use.” Matthew also added that the catalog includes an image of “what appears to be the same fragments when the cartonnage was only partially dismantled.” He was kind enough to share a scan of this image:

I have to admit, I’m not sure what to make of this. The circular shape is striking. Matthew observes: “Looks like there is the ongoing mix up of mummy cartonnage and non-mummy cartonnage.” Yes, this doesn’t look like a typical mummy mask or casing. I don’t know exactly what is meant in the catalog entry by the phrase “pressed and sewn together and recycled for domestic use.” Which “domestic” use? When Dirk Obbink used that same term to describe the source of the Sappho papyrus (after originally identifying the source as a mummy cartonnage), he implied that it included book covers: “…probably domestic or industrial cartonnage: it might have been employed e.g. for a book-cover or book-binding.” When it comes to book covers composed of waste papyrus, the most familiar pieces are probably the Nag Hammadi covers:

The leather covers of other single-quire codices have a similar look, with overlapping layers of scrap papyrus of varying sizes. Here is an image of the inside of the cover of the Berlin Coptic Proverbs codex (Staatsbibliothek zu Berlin, Ms. or. oct. 987, LDAB 107968): 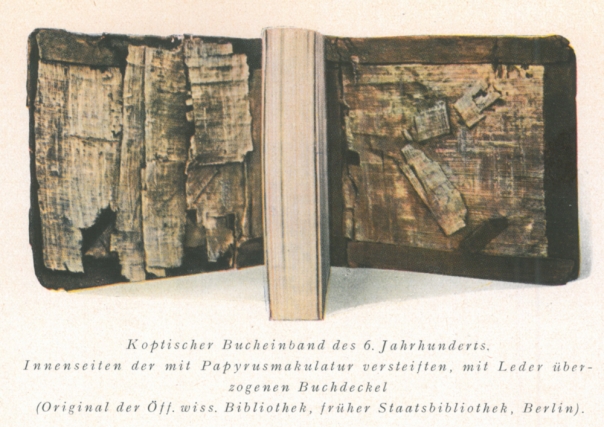 Aside from the strange circular shape of the 1 Samuel clump, the other interesting feature is the threads. The presence and placement of threads (especially those in the upper left corner) remind me a bit of the covers of some later multi-quire codices in which the covers were sewn directly to the book block.  There are several such boards in, for example, the Morgan collection: 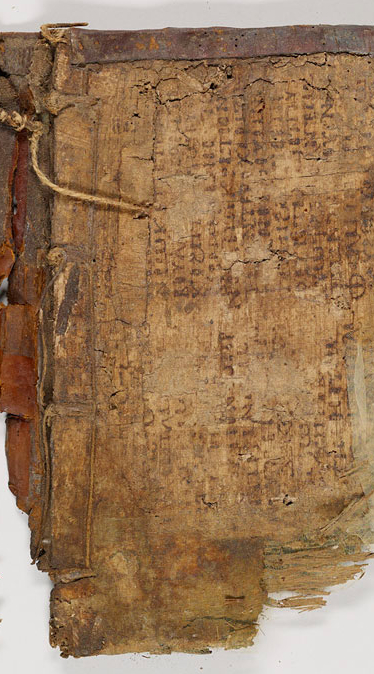 Another possibility is that the 1 Samuel clump is simply the compressed remains of a codex (that is to say, perhaps it was never part of a cover and not at all “cartonnage” in any sense of the word). The remains of ancient codices can look pretty terrible before they are properly conserved. Here is an image of the Freer Coptic Psalter (a parchment book, LDAB 107936) before the leaves were separated and conserved:

So, recall that in the video, Carroll mentioned that “underneath” the text of 1 Samuel, he found “Homer’s Iliad.” It makes me wonder: What passages of the Iliad were “underneath” the leaves of 1 Samuel? Were the Iliad fragments also in codex format? Might it be a single codex that contained excerpts of 1 Samuel and the Iliad? (There’s precedent for such “mixed” codices in the form of P.Bodmer XLV+XLVI+XLVII+XXVII, the Bodmer codex containing parts of Susanna, Daniel, and book 6 of Thucydides.)

To sort out these kinds of questions, we would need to know exactly how the threads passed through the leaves in the papyrus clump. Let us hope that there was detailed documentation of the whole separation process and that it was carried out under the watchful eye of an experienced conservator and an expert on ancient bookbinding (and not, say, on the kitchen stove while watching a football game).

In the scanned pages I saw from the “Passages” catalog, there was no information about provenance. When I was in Rome in 2014, I picked up the catalog accompanying the “Verbum Domini II” exhibition that Roberta Mazza mentioned in the comments to my earlier post. A papyrus fragment of 1 Samuel (GC.PAP.000416.1-.9) was also part of that exhibition:

The small photo in the catalog shows 1 Samuel 4:17 and does look like the same hand as the fragment containing 1 Samuel 1:1-5 that was on display in the Passages exhibit:

And as Roberta noted, the “Verbum Domini” catalog also confirms that the papyrus of 1 Samuel is indeed in the codex format. This is not surprising, given the (new) dates that these pieces are assigned in this catalog, late 4th-5th century CE in the heading and late 4th-6th century CE in the caption to the photo.

But again, the “Verbum Domini” catalog doesn’t provide any information about provenance, so the most pressing question remains: Where did it come from?

14 Responses to 1 Samuel and the Green Collection’s “Cartonnage”