A Green Collection Papyrus of Genesis in Greek

I continue to work through the “Passages” speakers series videos. During his talk in the 2011 sequence of lectures, Scott Carroll mentioned a number of literary papyri that the Green Collection had acquired. 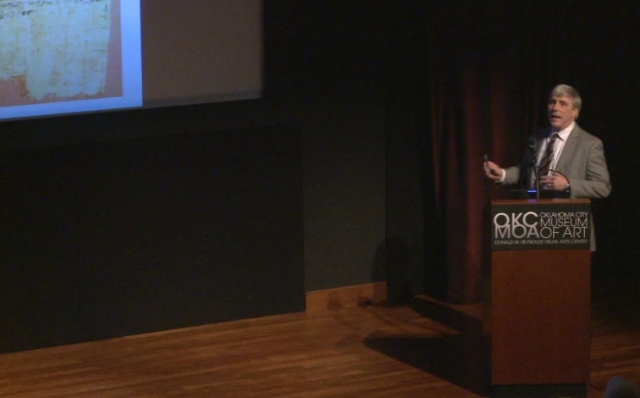 In the course of explaining the differences between literary papyri and documents, Carroll mentioned some of the Green Collection’s holdings:

“Papyri? I could not approximate the number of papyri that we have, because many pieces need to be pieced together. Mummy masks are dissolved. Things happen. . . .We have one of the earliest known works of Plato. We have one of the earliest known Greek literary texts in the world. It was written and copied certainly, no question, in the lost library of Alexandria. Alright? Ah, more fragments of that were found three days ago, two days ago–I found–I showed my parents! Alright? I mean that’s exciting!”

Carroll then gestures to the screen to describe one of the papyri being displayed:

“This is a text we’ve recently acquired. It’s from the book of Exodus and is an unknown text. Ah, so all sorts of texts fall into this category. Um, about 40% of our texts are literary texts. Most of them are in Greek. Many in Coptic, and the rest are in late Egyptian.”

But the fragmentary literary papyrus showing on the screen at the point when Carroll mentions the Exodus manuscript seems to contain instead Genesis (I can’t make out all the letters, but my guess would be Genesis 29:6-10):

Ah, all kinds of–I figure about 65 classical texts, discovered in the last year and a half. Biblical, biblical manuscripts, Dead Sea Scrolls. Um, I, I had mentioned this as well, this is abso-, this is a month ago. A leather robe, worn by a high priest in Israel, dating a hundred years after Daniel, written with Aramaic scripture around the collar. I, I hope you understand how unbelievable that is. I’m sorry I didn’t bring it with me [laughter]. We’re still working on it. Uh, these are all texts of Genesis, of Exodus. We have the earliest text of Exodus 24 here. Um, so [audience member asks: ‘That’s the earliest in the world?’] earliest in the world, yeah there’s nothing earlier in the world. This is the earliest in the world.

The video contains no clear images of the items that Carroll mentions, so it’s not entirely certain to which Genesis manuscript he is referring. Later in the video, he mentions a manuscript containing Genesis 17 (as usual, “the earliest text in the world of Genesis 17,” at about 44:40). In any event, we can add this papyrus of Genesis 29 to the list of Green Collection papyri for which we await publication with details about acquisition and provenance.

9 Responses to A Green Collection Papyrus of Genesis in Greek