P.Bodmer 1, A Land List Reused for Books 5 and 6 of the Iliad

2018 was an important year for the study of the Bodmer Papyri, with the launch of the “Papyri” cluster of the Bodmer Lab website, which made available digital images of the papyrus and parchment manuscripts from Egypt in the collection.

2019 is now off to a good start with the announcement that the publication of P.Bodmer 1 (recto) is now available to freely download:

P.Bodmer 1 is a land list from the Panopolite nome that was turned over and upside down to be reused to copy books 5 and 6 of the Iliad. It was acquired by Martin Bodmer in the early 1950s, and the reused side of the roll (the Iliad) was published already in 1954 by Victor Martin as P.Bodmer I. The document on the front of the roll, however, has remained unpublished until now.

I have not yet read the edition closely, but two points stand out: In the introduction, the editor helpfully clears up some confusion about the date of the document, showing that its terminus post quem (which in turn also provides a terminus for the reuse of the back of the papyrus) is the year 216/217 CE. Also, the editor made a very good choice by placing the transcription of the Greek text and the photograph of the relevant section of the papyrus roll on facing pages. This greatly facilitates checking the readings of a sometimes difficult document: 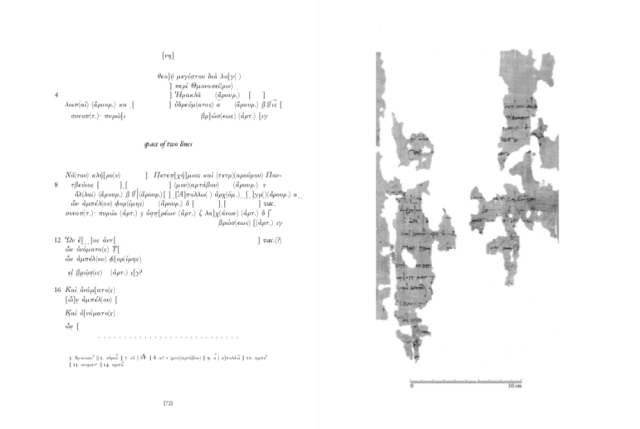 I’ve suggested that P.Bodmer 1 was probably not a part of the group of Christian codices that are believed to have come from a single ancient collection (the “Bodmer Papyri” proper) that was likely found near Tentyra in the early 1950s (see God’s Library, 188).

Color digital images of both sides of P.Bodmer 1 can be found at the Bodmer Lab website. An overview of the papyrus and parchment pieces from Egypt in the Bodmer collection can be found here.

This entry was posted in Bodmer Papyri. Bookmark the permalink.

3 Responses to P.Bodmer 1, A Land List Reused for Books 5 and 6 of the Iliad