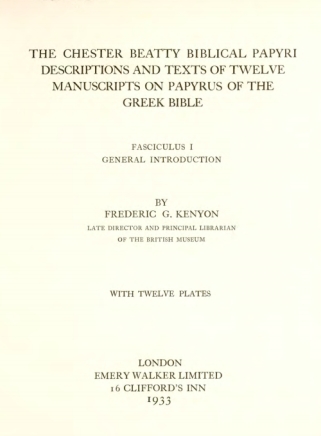 In addition to digital images of many of their manuscripts, the Chester Beatty Library in Dublin has also made available the text and plates of Frederic Kenyon’s editions of the Beatty Biblical Papyri. As I have noted before, these volumes are extremely difficult to find on the used book market, so this is a fantastic development. Many thanks to the people at the Beatty Library in Dublin! I can’t find an organized set of links to the pdf files, so I’ve made one below. Please use the comments to let me know if there are problems with any of the links.

Fasciculus I, Introduction, text and plates

[Update 10 June 2019: I see that the Institute for the Study of the Ancient World has made available Albert Pietersma’s improved edition of the Beatty Genesis codices (Codex IV and V)]

This entry was posted in Chester Beatty Papyri. Bookmark the permalink.