In the course of rooting around online for further insight into the early Christian papyrus fragments I have been discussing (here and here), I’ve followed in the tracks of others (like Brice Jones and Roberta Mazza) who were already going down this rabbit hole years ago. Today that path led to another papyrus in the Green Collection that travelled widely in the Passages exhibition. Unlike some of the other camera shy fragments in the collection, this manuscript appeared prominently in promotional materials. It is a papyrus containing the beginning of 1 Samuel in Greek. Here is an image published in the online version of The Oklahoman in May 2011: 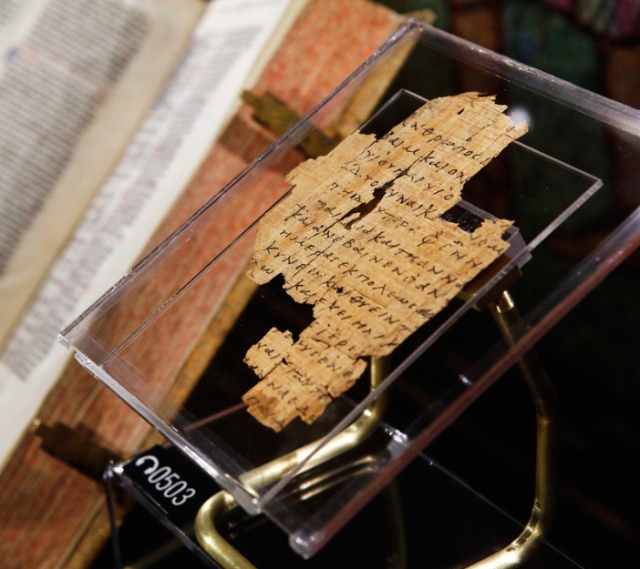 Papyrus containing 1 Samuel 1:1-5 in the Green Collection in 2011; image source: The Oklahoman

James Snapp posted a different image of the manuscript in February 2015 that was drawn from a promotional video (more on that below). Scott Carroll has mentioned this fragment on a number of occasions, describing it as “the oldest” papyrus of 1 Samuel (not an especially high bar since there are only a handful of other copies probably dating to the fourth century and later). But in a film clip from 15 May 2016, Carroll gives a succinct account of the origin of the piece (the video is a promotion for the Passages exhibition on the wretched.org website).

In the video, at about the 14:10 mark, Carroll describes the 1 Samuel papyrus as follows:

Carroll: “And so what you have in the back is a papyrus text of the very beginning of 1 Samuel. And, this I recovered from a mummy mask that I dismantled. Yeah! There were, there were seven chapters…This is the earliest text of 1 Samuel in the world.”
Host: “You found this?”
Carroll: “Oh yeah, this is my research area. And uh, and underneath this, underneath the seven chapters that were recovered was Homer’s Iliad. So the classical Bible.”

Now, a couple things about this quotation should grab our attention. First, of course, is the claim that this piece came from a mummy mask and was found together with a portion of the Iliad. As far as surviving literary papyri go, the Iliad is very common, due to its prestigious place in Greek culture and education. According to the Leuven Database of Ancient Books, there are 1490 extant papyri of the Iliad (West cited 1543 copies in his 2001 study). Now, if we apply the “cartonnage” filter to the Leuven Database results, that number goes down to 31, all dated between the 3rd and the 1st century BCE. So, that gives us a plausible date range for a “typical” Iliad papyrus recovered from mummy cartonnage (and that fits perfectly with what we know about the use of inscribed papyri for mummy cartonnage more generally). So, does the papyrus of 1 Samuel, which was allegedly found together with the Iliad papyrus, also have a similar date? The handwriting of the 1 Samuel piece does not look Ptolemaic to me. I would hazard a guess of 2nd to 4th century CE (I invite any experts to weigh in in the comments).

That leads to my second observation/question: What does Carroll mean with his repeated reference to “seven chapters” of 1 Samuel? Are there more fragments of this work? Or does he mean seven verses? If so, that’s quite interesting. The face of the papyrus that is showing contains 1 Samuel 1:1-5 (at least the beginning of verse 5). Does the text continue on the reverse? The amount of text in 1:5b-7 doesn’t seem like enough to match the amount of text on the surface that is visible in the photo, but it does raise an interesting possibility: Is this piece supposedly a fragment of a codex leaf recovered from mummy cartonnage? Again, using the Leuven Database, we can see that there are 308 items tagged as “cartonnage.” When we filter those by the format “codex,” the number goes down to just one, LDAB 108863, a 9th or 10th century CE Coptic text that almost certainly was extracted from a book cover rather than a mummy. So, if the 1 Samuel papyrus is from a codex recovered from mummy cartonnage, it would be unique–unless, of course, the other codex fragments that Scott Carroll claims to have extracted from mummy masks are actually legitimate, in which case Scott Carroll would seem to be uniquely able to find mummy masks carrying codex fragments. Anything is possible, but I would like to add this papyrus (whose official inventory number I do not know) to the list of items for which I would like representatives of the Museum of the Bible and/or the Green Collection to provide detailed acquisition and provenance information.

Ancient Stories from the Ancient Past