The Bodmer Codex of Visions

One of the most intriguing pieces among the papyrus and parchment manuscripts at the Fondation Martin Bodmer is the so-called Codex of Visions (LDAB: 1106). Its “P.Bodmer” designation is somewhat cumbersome: P.Bodmer XXXVIII+XXIX+XXX+XXXI+XXXII+XXXIII+XXXIV+XXXV+XXXVI+XXXVII. The codex contains one work that has long been well known, namely the “Visions” of the Shepherd of Hermas. The other works in the codex were previously unknown: the “Vision of Dorotheos, son of Quintus (ⲕⲩⲓⲛⲧⲟⲥ) the Poet” and a series of shorter poetic compositions that seem to be rhetorical exercises that use Christian content to develop classical rhetorical skills. For instance, among the poetic compositions are instances of ethopoiia (“speech-in-character”), such as a hexameter composition answering the question “What would Cain say after murdering Abel?” 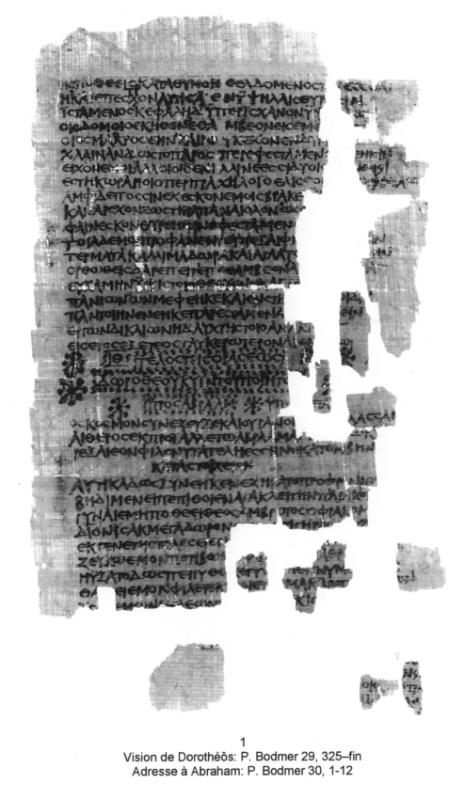 The codex also appears to be the work of multiple copyists. On occasion, the change of copyists occurs in the middle of a page, as in the transition between two of the shorter poems, the address “To the righteous” (ⲡⲣⲟⲥ ⲇⲓⲕⲁⲓⲟⲩⲥ, P.Bodmer XXXI) and the “[Eulogy?] of the Lord Jesus” ([ⲉⲩⲗⲟⲅⲓⲁ?] ⲧⲟⲩ ⲇⲉⲥⲡⲟⲧⲟⲩ ⲓⲏⲥⲟⲩ, P.Bodmer XXXII):

The codex appears at least relatively datable on internal grounds. Jan Bremmer has convincingly shown that the various military offices named in the Vision of Dorotheos suggest that the poem was composed in “the second half of the fourth century,” meaning that this particular copy was made at some point after that. “Quintus the Poet” has sometimes been identified as Quintus of Smyrna, a hexameter poet who is generally thought to have been active in the middle of the fourth century, but whose dates are themselves open to question. There is also debate about whether the “Dorotheos” of the Codex of Visions is the same figure as the “Dorotheus” mentioned in the dedications of another codex generally agreed to be part of the ancient collection of “Bodmer Papyri,” the Barcelona-Montserrat Greek-Latin codex.

Relative to the other Bodmer codices, the format of the Codex of Visions is fairly large, The leaves of the codex were probably about 17.5 cm wide and 28.5 cm high. The Bodmer Menander codex (13 cm wide by 27.5 cm high) is nearly as tall but not as wide.

The structure of the codex has caused some problems for scholars. It is clearly a single-quire codex (apparently rebound at least once in antiquity), but the precise original order of the texts was challenging to reconstruct.  The volume on Hermas published in 1991 contains the most accurate description of the make-up of the codex (superseding the discussion in the 1984 volume on the Vision of Dorotheos). I reproduce below the more accurate diagram of the quire with the traditional “P.Bodmer” designations added in red: