The Twenty-first Chapter of the Gospel According to John

Several of the articles that I have published recently have been pretty technical–reports of newly discovered fragments of manuscripts or new information about the construction of particular ancient books. My most recent article also concerns technical details of an ancient manuscript, but it is a little more adventurous, in that it tackles an old debate in scholarship on the Gospel According to John. To provide some context for a description of the article, I need to first discuss the ending of the Gospel According to John, which is what I will do in this post.

One of the classic “problems” of traditional New Testament scholarship is the ending of the Gospel According to John. To put it simply, the gospel appears to have two endings. Our surviving continuous-text manuscripts of the gospel end with John 21:25:

But there are also many other things that Jesus did; if every one of them were written down, I suppose that the world itself could not contain the books that would be written. (John 21:25, NRSV)

In our manuscripts that preserve this verse, an end title usually follows, as in the Codex Alexandrinus pictured below.

But chapter 21 of John follows after chapter 20, which also concludes in a way that feels like the end of a book. That is to say, the last verses of chapter 20 very much read like a summary and, in the words of John Ashton, a “resounding conclusion”:

Now Jesus did many other signs in the presence of his disciples, which are not written in this book. But these are written so that you may come to believe that Jesus is the Messiah, the Son of God, and that through believing you may have life in his name.  (John 20:30-31, NRSV)

At the same time, chapter 21 is regularly characterized as an “appendix” or “epilogue.” Raymond Brown, who classifies chapter 21 as an “epilogue,” claims that chapter 21 “differs from the rest of the Gospel in small stylistic details that betray difference of authorship.” Not everyone would agree with Brown’s stylistic assessment, but given observations like these, scholars have long entertained the possibility that a version of the Gospel According to John that lacked chapter 21 may have been in circulation in antiquity.

But unlike the various endings of the Gospel According to Mark, which are actually preserved in the ancient manuscripts and attested by early Christian writers, there is no physical evidence for the circulation of the Gospel According to John in anything other than the 21-chapter version. The idea of chapter 21 as a secondary addition is modern. It goes back at least to Julius Wellhausen’s 1908 commentary on John, which regarded chapter 21 as one of several passages that was added to an earlier composition (Does anyone know of earlier expressions of the hypothesis? I would be grateful to learn of them.) [UPDATE 7 Oct. 2018: The hypotheses is actually considerably earlier.]

But the modernity of the hypothesis does not mean it is not widely held. I think it’s fair to say that most Johannine scholars would regard chapter 21 as a secondary addition to a 20-chapter “edition” (Ashton’s term) of the gospel that existed at an earlier period.

As I said, no manuscript evidence of a 20-chapter version of John has been discovered. A Syriac codex of the four gospels of the fifth or sixth century published in the 19th century (LDAB 115518) ends with John 20:25, but the codex seems to be missing its final leaves. More recently, Gesa Schenke has raised the possibility that a stray sheet of Coptic text in the Bodleian Library might be a leaf from a codex containing a copy of the Gospel According to John in Coptic that lacked chapter 21 (LDAB 107884). The text ends abruptly after John 20:31 in the middle of a page: 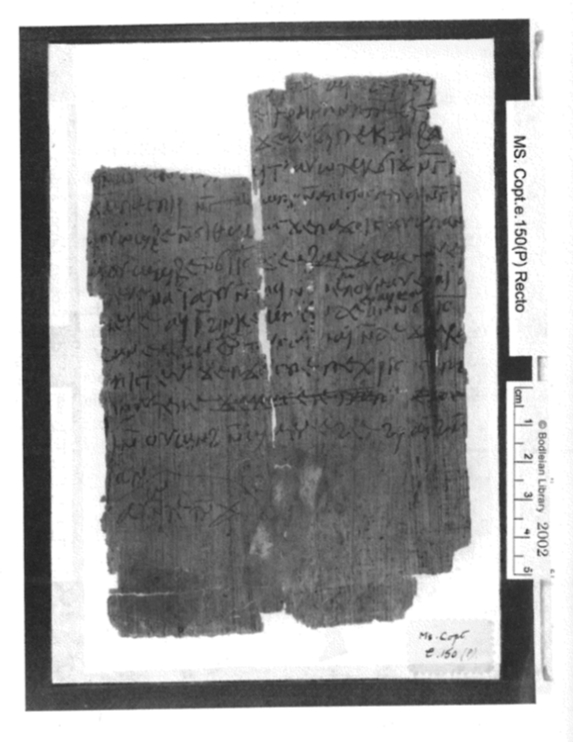 But at the annual meeting of the Society of Biblical Literature in 2017, Christian Askeland delivered a paper that clearly showed this papyrus was not part of a continuous text manuscript of the Gospel According to John. It seems instead to be a writing exercise of some sort.

This entry was posted in New Testament. Bookmark the permalink.