P.Bodmer II as Possible Evidence for the Circulation of John without Chapter 21

In the most recent issue of the journal Early Christianity (vol. 9, 2018), I have an article that bears on one of the classic “problems” of New Testament interpretation. I’ve given some background on the issues in previous posts here and here. So finally, here is the abstract of the article:

“As part of the efforts of the Bodmer Lab to digitize and catalog the ancient papyrus and parchment items at the Fondation Martin Bodmer, I have recently had occasion to thoroughly re-examine the published data about the construction of P.Bodm. 2 (LDAB 2777), the well known papyrus codex containing the Gospel according to John in Greek.2 In the course of this reassessment, some previously overlooked features of the codex came to light. To summarize as concisely as possible: I found that one fragmentary page of P.Bodm. 2 (page 149, a codicological recto) appears to have an unusually small amount of text and an unusually large lower margin. This page also happens to contain the conclusion to chapter 20 of John’s Gospel. Chapter 21 begins at the top of the next page (page 150, a codicological verso), which contains a more normal amount of text and has a more normal lower margin. It has for some time been recognized that the copyist of P.Bodm. 2 made an initial copy of an exemplar and then adjusted and corrected the copied text against a different exemplar with different textual affinities. This paper raises the possibility that the first exemplar of P.Bodm. 2 lacked chapter 21. If this hypothesis is correct, P.Bodm. 2 would provide the first piece of material evidence for the circulation of a copy of the Gospel according to John that ended after chapter 20.”

As I note in the abstract, what set me down the road to writing this article was the realization that the page containing the end of John 20 had significantly fewer letters than other pages in this part of the codex. And then there was the interesting coincidence of the page break between chapters 20 and 21, which is not a normal practice in this codex. 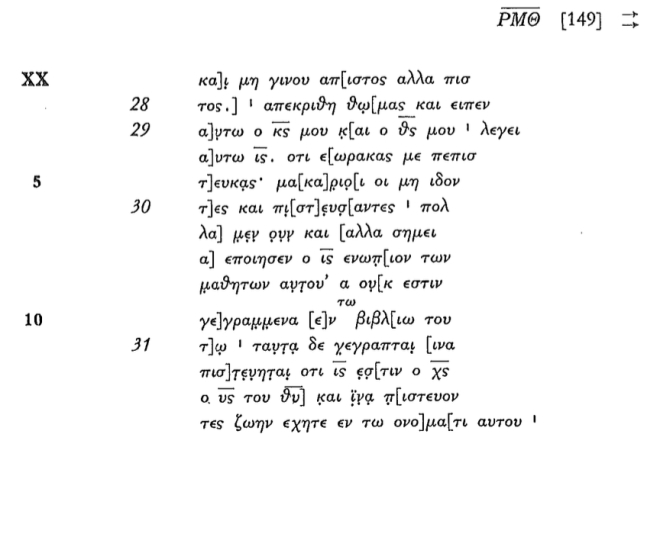 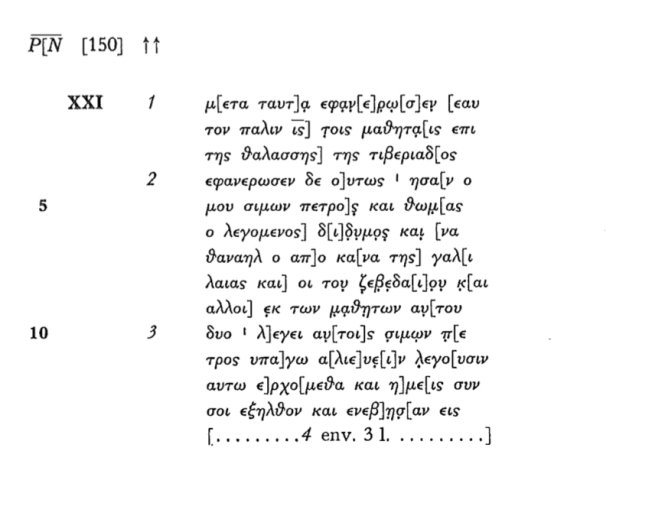 I then also noticed that page 149 with the end of John 20 also had an unusually large lower margin relative to other pages in this section of the codex:

P.Bodmer II, Comparison of lower margins of page 113 and page 149, which ends with the conclusion of John 20:31

The argument of the article is based on a lot of technical data (measurements of margins of pages, average number of letters per page, etc.). To see all the data that actually makes up the argument, you’ll have to refer to the article, which contains a few appendices and a fairly detailed discussion of the quire structure of the codex.

The idea that one of the exemplars used by the copyist ended after chapter 20 is admittedly speculative, but the large space between the last line of text on page 149 and the bottom of the page really does seem to require some kind of explanation.

9 Responses to P.Bodmer II as Possible Evidence for the Circulation of John without Chapter 21